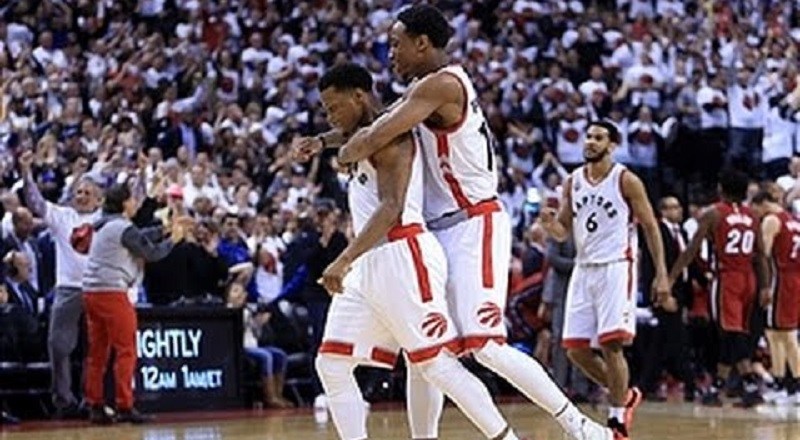 Last season, and the year before, the Toronto Raptors, and their fans, were afraid they’d lose Kyle Lowry and DeMar DeRozan. Respectively, the players were playing contract seasons out. Due to history, it looked like the Raptors would lose out.

Early in Toronto Raptors’ history, they drafted Tracy McGrady, and he grew into a budding star. The following year, they traded Golden State for the draft rights of Vince Carter. Soon, Carter became the cornerstone of the franchise.

With Vince Carter and Tracy McGrady, the Toronto Raptors looked like the NBA’s most-promising team. However, the summer of 2000 changed things, as Tracy McGrady opted to leave. Soon, injuries caught up to Vince Carter, and the Raptors bottomed out.

To avoid also losing Vince Carter, in free agency, he was traded to the New Jersey Nets. The last two Vince Carter seasons were also the first Chris Bosh seasons, and he took it upon himself to turn the Raptors around. Behind heroic play from Bosh, the Raptors tied a franchise record, 47 wins, and returned to the playoffs, losing to Carter’s Nets in 2007, and the Dwight Howard Orlando Magic, in 2008.

By 2009, the Raptors were back to struggling, even with Chris Bosh leading the way. In 2010, Bosh had a future superstar, in DeMar DeRozan, who was drafted in the 2009 offseason. The Raptors played strongly and looked like a playoff lock, until late season surges by the Miami Heat and Charlotte Bobcats knocked them out of contention.

Following the precedent of Tracy McGrady and Vince Carter, Chris Bosh would leave the Raptors, opting to join forces with Dwyane Wade, on the Miami Heat. Quickly, the Raptors bottomed out, going 22-60, with no clear team leader. In the 2011-2012 lockout season, the Raptors actually managed to increase their win total.

The 2012 offseason saw Kyle Lowry traded to Toronto and the Raptors acquired Rudy Gay, looking to be a strong contender. After only going 34-48, Kyle Lowry and DeMar DeRozan, the team’s consistent 20 ppg player, decided they would step up and lead the franchise. In just one season, the Raptors won a franchise record 48 games.

Ultimately, the Raptors would lose in the first round to the Brooklyn Nets, in a heart-breaking Game 7, in 2014. The next year, they suffered an even more embarrassing loss, being swept by John Wall’s Washington Wizards. That loss inspired the Raptors to step up and make the next step, officially becoming contenders.

In 2016, the Raptors, behind heroic efforts from DeRozan and Lowry, had their first 50-win season, and ended up going 56-26, beating Paul George’s Pacers in 7, the final season of Dwyane Wade’s Miami Heat in 7 (before his triumphant return), and then lost to the Cavaliers in their first-ever Conference Finals’ appearance, falling in six games to LeBron James and Kyrie Irving.

Following the 2016 season, Kobe Bryant retired, and the Lakers began looking for someone to fill his shoes. A lot of speculation said DeMar DeRozan would go back home and sign with the Lakers to play for his home team. After all, the Raptors lost Tracy McGrady, Vince Carter, and Chris Bosh in similar fashion.

DeMar DeRozan was different, however, as he saw the chance to make history for his own team. Already a part of so many Raptors’ firsts, he chose to stay with the team. Last season saw another 50-win Raptor team, tying Cleveland with a 51-31 record, but their playoff run saw them struggle against Giannis’ Bucks, before getting swept by Cleveland.

After the disappointing ending of the Raptors’ 2017 season, there was speculation about Kyle Lowry being frustrated, and choosing to sign with the Spurs or Warriors. Ultimately, Kyle Lowry followed DeMar DeRozan’s lead, and chose to change Raptors’ history, in order to make it.

Eighteen years after the Raptors first lost Tracy McGrady, the what-ifs about the Raptors began. Even Vince Carter has spoken on it, he and T-Mac, collectively. For sure, the Raptors’ fans were robbed, and the world may never know, but the Raptors fans did get to see what an amazing duo is.

While DeMar DeRozan is the exciting player and scorer, in the vein of Carter and McGrady, Kyle Lowry is more of a facilitator. Regardless, they get the job done, and they have remained dedicated to Toronto and the Raptors’ organization, sticking with it to make a contender. As it currently stands, the Raptors are the top team in the East.

The success of the Raptors has Chris Bosh saying he wants to return to the team. Plus, Drake already said the team is working on signing Vince Carter, in order to prepare for a strong playoff run.

Watch highlights of the DeRozan/Kyle Lowry era of Raptors’ basketball below: