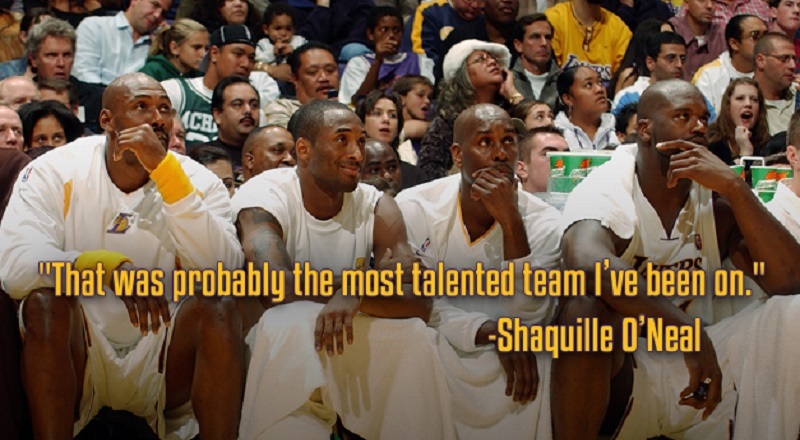 The Los Angeles Lakers show up on this list rather often, again, this is a testament to how great that organization is. Also, Shaquille O’Neal logs his second entry on the list, a testament to his own greatness. Shaq was a key player on two teams on this list.

Injuries limited the 2003 Lakers from pulling off a historic four-peat, done only once in NBA history, during the old Celtics’ era, when they owned a decade. But, the Lakers could start anew for 2004. They made great strides in this by signing Gary Payton and Karl Malone.

Likely, if not for Michael Jordan and the Chicago Bulls dynasty, the two additions of the 2004 Lakers would have won a couple of rings. In the end, Karl Malone had the choice of going for the NBA’s all-time scoring championship or a world title. Like Gary Payton, he went all out for a ring and, like Gary Payton, he didn’t get one.

Shaquille O’Neal was key in recruiting Gary Payton, Karl Malone, and Horace Grant (for the second time, first with the 1995 Orlando Magic featured twice on the site). However, personal drama with Kobe Bryant doomed this season and Shaq’s time with the Lakers, from the beginning. While the Lakers got off to a historic 21-3 start, injuries slowed the team down and they finished 56-26, third in the West.

When the playoffs came, the Lakers were fully healthy and they defeated Yao Ming and Steve Francis’ Houston Rockets, Tim Duncan’s Spurs in six, overcoming an 0-2 deficit, and Kevin Garnett’s Minnesota Timberwolves in their most-recent playoff appearance, to date. What looked like a rematch of the 2000 NBA Finals with Reggie Miller’s Indiana Pacers were upset by the starless Detroit Pistons and it looked like an easy series.

The series was easy, for the Pistons, as they dismissed the mighty Lakers in five games, effectively ending their dynasty and denying Karl Malone a championship. Phil Jackson was handed his first of two NBA Finals losses and Shaq would join the Miami Heat, followed by Gary Payton and they would taste championship glory. Kobe, meanwhile, stayed through rebuilding and felt the stigma coming with being one of the most-disappointing teams ever.

Watch highlights from the 2004 NBA Finals below: