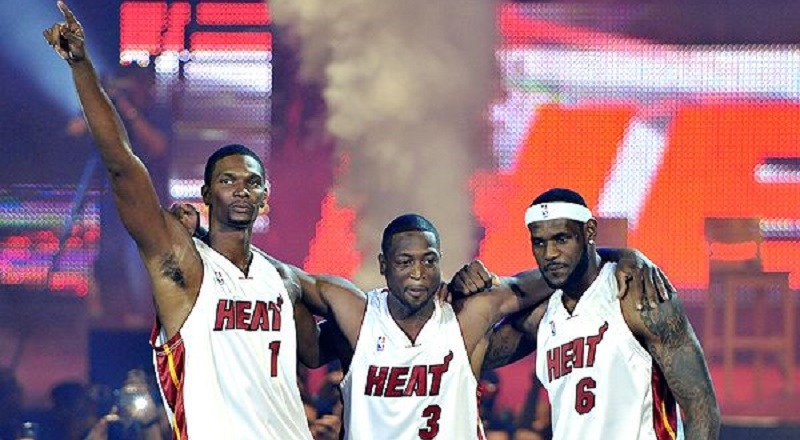 Between 2006 and 2010, it was frustrating to be a Miami Heat fan, as the team collapsed from championship contention. Plenty of unfairness was dealt to Dwyane Wade and the Heat. The final straw came when their 2010 season was dashed by that Paul Pierce jumper.

The Celtics would go on to take out the Miami Heat in five games, before stunning LeBron James’ Cleveland Cavaliers in six games in the next round. A change had to be made, immediately. After the Game 5 loss, Dwyane Wade said that was his last first round exit for a long time.

By any means necessary, Dwyane Wade took on the role of GM and recruited Chris Bosh and LeBron James. Immediately, the Heat held a celebration at their arena in Miami, pissing off the entire NBA fan base, outside of their own fans. But, those who knew the struggle understood it.

Projected to go 82-0 by some, the Miami Heat only went 58-24, following a slow start and a disappointing five-game losing streak, midseason. Still, the Heat held on for the second seed and dismantled the Philadelphia 76ers, Celtics, and Chicago Bulls all in five games in the first three rounds of the playoffs. Against the Dallas Mavericks, Wade established himself as the Heat’s leader, as Miami took a 2-1 lead in the series.

However, the battle over whose team the Heat was cost them, as Dallas would avenge 2006 with their own comeback, needing only three wins, as opposed to the Heat’s four from five years prior. Given all the Miami Heat put into that squad, they were disappointing. Their regular season record, not even getting 60 wins was bad enough, but to not win a title was even more embarrassing.

Watch highlights from the 2011 NBA Finals below: