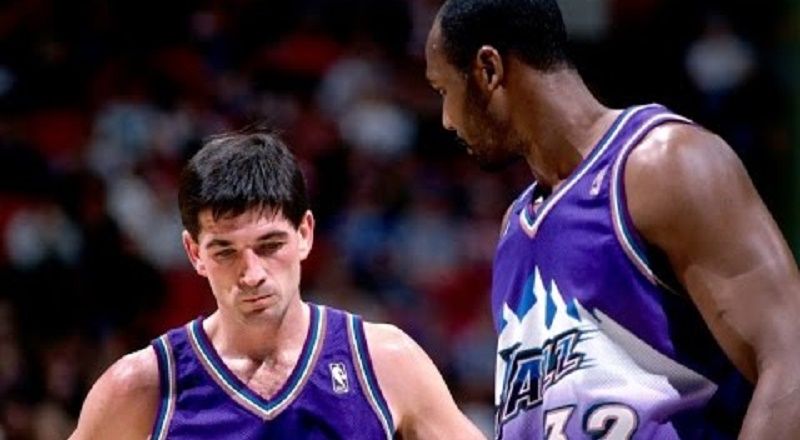 Recently, there was the end of an era, with Kevin Durant leaving the house he built with the Oklahoma City Thunder. Sam Presti said it best, KD was one of the Thunder’s “founding fathers.” With Russell Westbrook, he built a great squad that just kept coming up short, so, in light of this, HHV is spotlighting similar squads, starting with Stockton and Malone’s Utah Jazz.

In the 1990s, the Utah Jazz came into their own and finally became a championship contender. Like many others, the Jazz fell from NBA grace at the hands of Michael Jordan and the Chicago Bulls. Two of their six titles were won at the expense of the Utah Jazz and their fanbase.

Originating in New Orleans, the Jazz relocated to Salt Lake City in 1979 and would make their first playoff appearance, four years later. The squad achieved minor success and would draft John Stockton in 1985 and then would draft Karl Malone in 1986. By 1988, the Jazz decided to make these two the cornerstone of the franchise.

Struggling as any young team would, the Utah Jazz’ early seasons with Stockton and Malone, they first had to contend with the Magic Johnson-led Lakers always winning the West. The Jazz would run into this freight train in 1988, before finding contemporary rivals in the Rockets and the Trail Blazers.

By the 1990s, Karl Malone and John Stockton grew tired of the losing, with the final straw being their Game 7 loss in the Western Conference Finals to Gary Payton and Shawn Kemp’s Seattle SuperSonics. Following this, Karl Malone famously questioned “why is everybody else winning and we still trying?” Change would soon come.

The Utah Jazz never fielded a championship squad, but they did have some epic playoff battles. Their games against the Olajuwon Rockets were memorable, especially the 1995 Houston upset. Texas wasn’t a hospitable state for Utah, as they also had major playoff showdowns with David Robinson’s Spurs, in 1994, 1996, and 1998, winning all.

Had it not been for the Bulls’ 69 win season, more attention would have been given to Malone and Stockton racking up 64 wins for the Jazz. They finally defeated the Rockets and Shaq and Kobe in their first try, en route to their first of two 60 win seasons. Both seasons resulted in Game 6 Finals losses to Michael Jordan’s Bulls.

There would be another league-best season for the Jazz and another Malone MVP in 1999. His first MVP season came in 1997, but the writing was on the wall. Struggling to defeat Chris Webber’s young Sacramento Kings exposed the team as aging, leading to consecutive second round losses to the Blazers. Finally, Webber’s Kings would end their run in consecutive wins over the Jazz in 2002 and 2003.

In 2003, John Stockton retired and then Karl Malone signed with the Los Angeles Lakers.