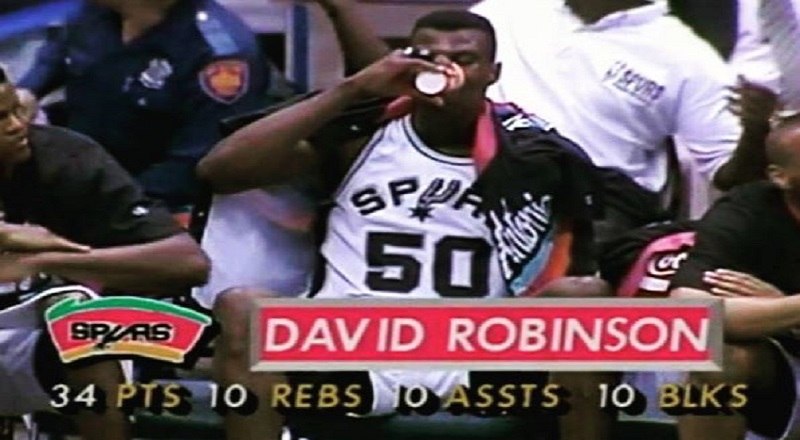 As of the 2015 season, the San Antonio Spurs have become the most-successful franchise in NBA history. Yes, the Spurs are now more successful than the Lakers and the Celtics. However, they still are behind them, and the Chicago Bulls, in terms of most championships.

Long before Kawhi Leonard, there was Tim Duncan, who is best-known for playing with Manu Ginobili and Tony Parker. But, even before the era of Tim Duncan, David Robinson was the man in San Antonio. During that time period, though, the Spurs were more like the Utah Jazz and Portland Trail Blazers than a dynasty, a good team with a strong core, but not enough.

David Robinson is an all-time NBA great, because of how he lifted the San Antonio Spurs into relevance, in the NBA, after being an also-ran former ABA team. But, the move that really took David Robinson to the next level was his willingness to step aside and let Tim Duncan lead the Spurs. That decision took the Spurs from a team CAPABLE of winning 60 + games and possibly a title, to a guaranteed annual contender.

Before Robinson, the Spurs were a consistent playoff team, but not a lock to make it every year. During one season like that, the Spurs bottomed out and landed the top draft pick. David Robinson was drafted in 1987, but didn’t debut on the team until 1989, but he immediately led the Spurs to their best record in franchise history, at the time, when he joined the Spurs.

The era of David Robinson saw the Spurs always win close to 50 games, topping at 56, usually. He had a solid core of players around him, but David Robinson did not have a second option. No question, the Spurs were good, but there were always the Seattle SuperSonics with Gary Payton and Shawn Kemp, the Utah Jazz with Karl Malone and John Stockton, and the Houston Rockets, led by Hakeem Olajuwon.

Adding in the Phoenix Suns, once Charles Barkley joined the team, and Clyde Drexler’s Portland Trail Blazers, before he left for Houston makes the West historically stacked. In 1995, David Robinson had his best chance to win a championship, when he led the Spurs to a franchise-best 62-20 record, which the Spurs only topped in 2016, when they went 67-15, led by Kawhi Leonard.

That 1995 squad saw David Robinson crowned as league MVP and the Spurs make it to the Conference Finals for the first time in the modern era. But, Hakeem Olajuwon and Clyde Drexler proved to be too much for the Spurs, with their Houston Rockets prevailing in six games, en route to sweeping Shaq and Penny’s Magic in the Finals. In the end, that was Robinson’s Spurs’ best chance to win a championship.

David Robinson’s Spurs began a decline, that was only accelerated after he got injured in the 1996-1997 season. The following season, 1995-96 season, saw the Spurs maintain a 59 win season, down only three wins, but lose in the second round to that Malone/Stockton Jazz squad. Then, the injury happened, and then Tim Duncan came and this turned the Spurs into a great team from a good one.

But, since the Warriors made sure there’d be no Western Conference Finals of interest, as the Spurs would’ve made it competitive, we decided to put together a collection of David Robinson videos. He probably would’ve never won a championship, but he lit the Clippers up for 71 points in 1995 to beat Shaq out for MVP. That wasn’t all he did, so that’ll get the spotlight, seeing how the Spurs won’t have any new games until October and Manu might be gone.

Watch David Robinson highlights and highlights from the Robinson-era Spurs below:

David Robinson scores 34 points vs. Dikembe Mutombo and the Nuggets (1992)

David Robinson scores 53 points vs. Alonzo Mourning and the Hornets (1993)

David Robinson scores 36 points vs. Suns in Game 4 of 1993 playoffs