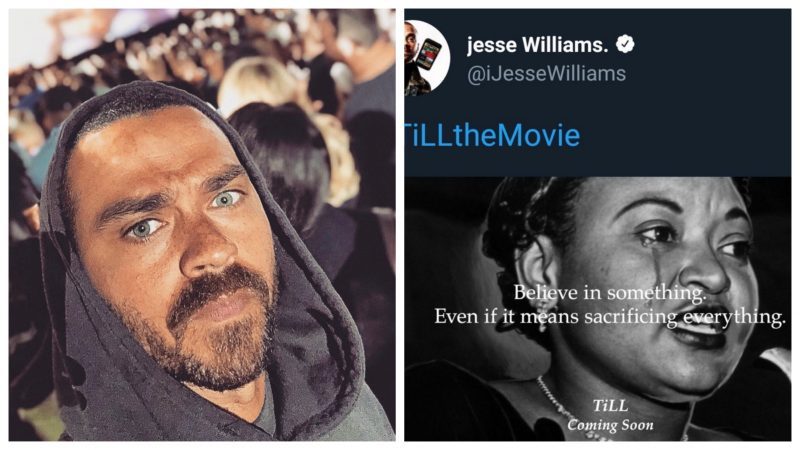 This is just not a good week for activist on social media. Jesse Williams is getting dragged for turning Emmett Till’s death into the Colin Kaepernick NIKE meme to promote his new movie about seeking justice following Emmett’s brutal murder. In tweets, that are now deleted, Williams posted photos of Emmett’s mother, Mamie Till, crying with the caption “Believe in something. Even if it means sacrificing everything.”

People on twitter quickly advised Jesse that the tweets were in poor taste and many told him to delete the post altogether. He deleted the tweets, but screenshots live on forever. Jesse’s name is now trending, as everyone reads him for filth.

Take a look at some of the tweets below.

Jesse Williams posted that photo of Mamie Till with the Kaepernick quote like she made a choice to sacrifice her son to uh… murder.

Let's think about things before we slap a meme over it.

So Jesse Williams divorces a black woman and loses his good sense it seems…what is this?! Emmett Till wasn't a sacrifice he was murdered by white supremacy.

(Also too many people liked this bullshit) pic.twitter.com/i5ZlBRnuWh

Remember when folks thought Jesse Williams was the shit for that one speech? pic.twitter.com/JSuaYYGN2A

More in Articles
Rich The Kid Expecting Child With GF Tori Brixx Although He Is Legally Married to Ex-Twerk Team Member, Lady Luscious
Sky From Black Ink Needs Your Help Looking For A Man! #FindSkyAGuy