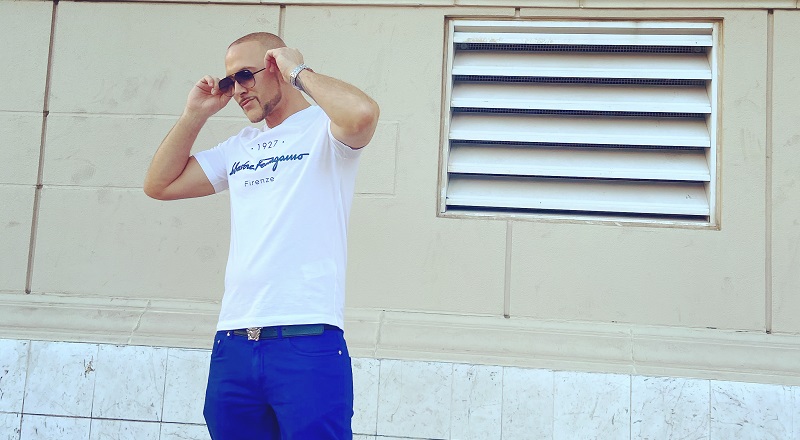 Myster Whyo is someone who may not ring many bells, but people know who he is. Anyone familiar with the old school hip hop blogs know this man. Back then, he was going by Oh No iTs Y.O. Since that era, a lot has changed. A bit older and much wiser, Myster Whyo stopped releasing music for a while, but he kept recording, and now he’s back.

Myster Whyo has a lot of momentum, right now. Currently, the man is promoting his single, “Right on Tyme,” which is doing well for him. As a result, Whyo is actually putting in work on a full project. For the first time in years, he is preparing to return with a collection of new music. With that being said, Myster Whyo is working with some heavy hitters in the game.

Myster Whyo recently gave Hip-HopVibe.com access to what he has going on. Recently, he spoke to us about the success of the “Right on Tyme” record. In addition, he discussed his upcoming work, the new project, and his name change.

Myster Whyo on “Right on Tyme:”

Good look taking the time out to speak with Hip-HopVibe. You’re back at it, after a slight hiatus. How does it feel? It feels good! I have a whole bunch of songs I never did anything with. One day, I was playing some songs for my people and they told me I had to get back at it! My friends literally motivated me to get back to it! I was out in Las Vegas for Memorial Day Weekend and I shot a video for a song I did a couple years ago called “Right on Tyme!” It has a nice summer vibe to it so I thought if I came back, I have to come back with this one!

“Right on Tyme!” is a hot record, very different and gives summer pool vibes. How did that record come about? Shout out to Kool DJ Daze (@KoolDJDaze)! He’s been lacing me with beats for years! He sent me the “Right on Tyme” beat, one day, and I knew it was special! I hit my man, Dominic (@writtenbydom), and I told him about the beat and sent it to him! He sent it back to me a couple of days later and it was fire! I probably recorded like five different versions of the song until I got it right! The final version came when I was recording at D Block studios with Dayzel (@the_real_dayzel). I was in there laying down my vocals and my man Butta (@ButtaGoodMusic) who has done work with Jada (Jadakiss), Styles (Styles P) and Sheek (Sheek Louch) over the years, came through to lay down some ad-libs on the track for me!

Myster Whyo on indie vs. major:

The good thing about music now is that you can just grind and build your own fanbase, as the internet made things 10x easier, even if you get hot to a point where majors calling you have leverage. What’s the goal for Myster Whyo? Go major or stay indie? You know, I’m just happy to get my music out for the world to hear! Do I wish I was famous and on a major? Absolutely! Who wouldn’t want that? Lol But I’m happy being indie! I’m my own boss! Drop music when I want to! But right now, I’m just focused on pushing what’s out there! “Right on Tyme!” is my brand new 2022 song and I dropped a couple of re-releases this year! “The World Made Me Do iT,” from 2007, and “The World Made Me Do iT AGAIN!” from 2013! I’m proud of my 2007 release, but I’m even more proud of my 2013 re-release of The world made me do iT AGAIN! It’s all about “Right on Tyme” right now, though, and making some money to feed my daughters!

Myster Whyo on consistency and where his name came from:

Now you see you have to be consistent especially on today’s climate, what’s the goal to close out 2022 strong? I truly believe “Right on Tyme” is the type of song to gain some attention with! I’m gonna go super hard with that record! I’m getting ready to hit the lab and record a follow up to it! With these three releases, it kind of breathed new life into myself and the rest of the Bottom Line Legacy family! There has been conversations about recording some new Bottom Line songs as well! But like you said, consistency is key! I just have to follow that rule!

What’s the meaning behind the name Myster Yo? My best friend, Frankie Gunz, was from The Bronx! When I used to go check him I would see all his people from the block and they would show me love! A lot of times you say what’s up to the same faces over and over and don’t ever really know that person’s name! I would slide thru and people would tell Frankie “Yo, your man from Y.O (Yonkers) was over here before! He’s madd cool yo!” So everyone started calling me Y.O from that point on! Then over time I just played with the name a little… Oh No iTs Y.O eventually matured to Myster Whyo!

Now that the single is moving do you plan on releasing a full project for your fans? I’m absolutely gonna hit the lab and work on an EP! I have a lot of new ideas and some of them I want to bring to life!  In my opinion, me stepping away was great, because lyrics just flow through my head all day now! I don’t ever have to force a lyric! I barely even listen to 2022 rap music, so I know whatever I drop won’t sound like nothing that is out right now!

What is your final message to the fans of HHV? Thank you for taking your time to read this interview! Thank you if you support me or any of my music! Shout of to HHV for the interview! Check out my new single “Right on Tyme” and the re-release of my last project “The world made me do iT AGAIN!” on all streaming platforms! Give me a thumbs up, a like or a nice comment! Much Love 2 Everyone that wants to see others succeed! Follow me @Myster_Whyo and add me 2 your playlist!

More in Articles
TheQuantumPlane has launched a platform to help independent artists
DJ Kryptonita is making a name for himself on the Utah club scene, working with major Reggaeton artists