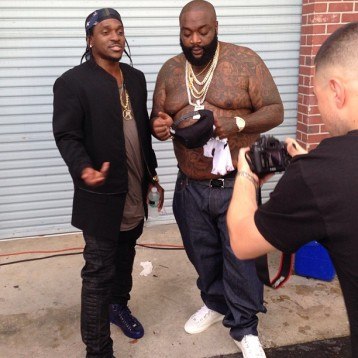 Officially preparing to launch his solo career, Pusha T turns to Rick Ross. In 2010, Pusha T signed with G.O.O.D. Music and had mind-blowing performances on Kanye West’s comeback album, My Beautiful Dark Twisted Fantasy. Since then, Pusha T has collaborated with Tyler, the Creator and Future, among others.

Wrath of Caine is Pusha T’s “mixtape before the album” and it is set to be released in anticipation of his My Name is My Name album. “Millions” is the first single off the Wrath of Caine. Previously, the song started a Twitter beef with Rico Beats and Southside and now a music video is in the works.

See additional photos of the “Millions” video shoot below: