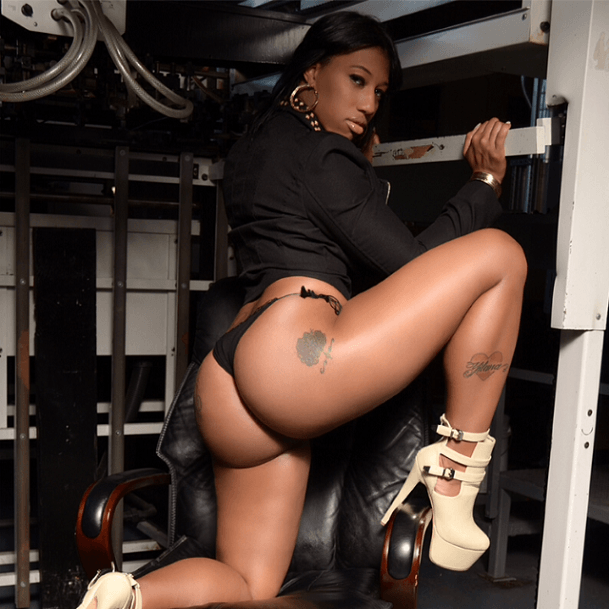 Plenty of new faces are popping up and having success in the modeling industry. A new name who has emerged is Porsh Monroe, who continues to make a bigger name for herself. After making several magazine features, Porsh Monroe decided to come and give the good guys a visit.

Porsh Monroe is building a name for herself through her natural good looks and seductive curves. These attributes have helped her come a long way in a brief period of time. In fact, Porsh Monroe only began modeling a little under a year ago and she has some big features under her belt.

This week, Porsh Monroe decided to give some of her time to Hip Hop Vibe. Speaking with us for the Hottie of the Week feature, Porsh Monroe explained how she got so deeply involved in the game. She also spoke on exactly what it is that piques her interests and how to get her piqued.

How did you get your start in modeling and how long have you been doing it? I started modeling about almost a year ago. It was something I wanted to get into and use as a stepping stone for other things. My first publication was with Shy Girl Digital with the owner of the mag, Mr. Steven Ward.

What are your long term goals in modeling and how long do you think it will take to achieve it? My long term goals are to go to the top and pursue modeling, not just the vixen title, but branch off into other genres of modeling. I would love to create a shoe line and a possible perfume line maybe give me about 2 years

Would you say that being raised in NYC adds to your swag and sex appeal? OH OF COURSE, NYC is advanced in many different ways and I carry the “NEW YORK” attitude very well. In a good way (laughs).

What’s sexy about Porsh Monroe and what makes her different from other models? What makes me different is that my beauty is truly derived from the inside rather than out. I’m so humble and my personality just adds on to my beauty.

What other publications would you like to have spreads in? I’m going for Sports Illustrated, The Source and even Playboy to just name a few.

Who are some of the other models that you think are sexy? (Laughs) Destiny Moore thinks I’m sexy.

Do you have any big projects coming up? Yes, I’m looking forward to working with XXL and Sweets Magazine and a couple more.

If you were giving me a lapdance what song would be playing and what kind of moves would I see from you? Umm “Half On a Baby” by R.Kelly or “Feeling On Ya Booty” (laughs). You can’t put a name on it, my moves are indescribable!

More in Hottie of the Week
Too Hot For TV: Irene The Dream teases lesbian encounter [PHOTO]
Too Hot For TV: Erica Mena flaunts sexy curves in seductive one piece [PHOTO]