Home » Articles » 18-Year-Old Who Refused To Say “F*ck Donald Trump” at YG Performance at Mala Luna Festival Issues Open Letter to Him – “I May Not Agree With YG’s Hatred Towards President Trump, However, He Crossed a Line When He Singled Me Out For Not Singing Along To FDT” [VIDEOS] 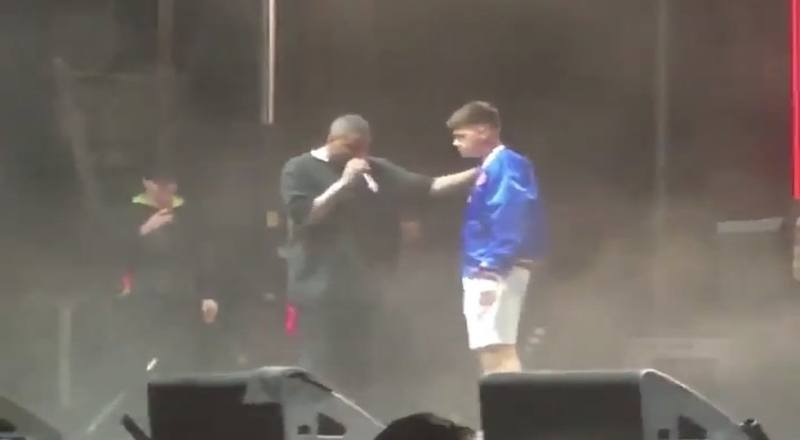 Back in 2016, YG created the legendary Donald Trump diss record, “FDT” (F*ck Donald Trump) featuring Nipsey Hussle. This was the year that Trump was sadly elected as president though. Nonetheless, the Compton rapper continues to do a great job of calling out Trump at his shows. Whenever he performs this record, he calls out fans not rapping along to it and brings them on stage to have an opportunity to actually say FDT to prove that they actually don’t support Trump.

17-year-old Austin Joyner was at the Mala Luna festival in San Antontio for the festival that took place on October 26 and 27. He was in town celebrating his upcoming 18th birthday on the 27. YG brought him on stage to say FDT and he refused to do so. As a result, YG told security to get him off stage.

Joyner is now finally addressing the incident as he wrote an open letter to YG on Twitter this weekend. He made it clear that it wasn’t a YG concert and that it was for the Mala Luna festival. He claimed that he never heard of YG but did know about the FDT song and doesn’t “Speak for the white boys” as YG said.

Joyner said he was just standing while YG fans had their middle fingers up and yelling FDT. He said he didn’t want to present himself that way and while he supports freedom of speech and YG’s hate towards Trump, he believes YG crossed a line for singling him out for not rapping along to the song.

Joyner admitted he was nervous when YG asked him to come on stage as he didn’t want to but he felt that he had no choice. He raised his hands up on stage to hype himself up so he wouldn’t look nervous as well. He added that he thinks the Holy Spirit took over and God was on his side. Joyner believes that YG carries hate for people like Trump and him but he doesn’t feel that way about YG.

Joyner made it clear that if YG asked him to curse Barack Obama or Hillary Clinton, he wouldn’t have done it either because he’s a proud Christian and doesn’t talk about people that way and their lives have value. He also didn’t approve of being called a racist by YG. For some reason, Joyner wanted to prove that he isn’t a racist by saying the three friends he came with were Hispanic and Nigerian. He added that his mom is Mexican and his dad is white. He concluded the long letter by saying he’s not racist and never has been along with YG needing to respect people at his shows.

Supporting Trump and anything he stands for is wrong. YG maybe could’ve handled this situation differently but you know what to expect when he performs this song.

Many platforms depicted this story inaccurately

Here is the truth and I wrote a letter to YG.

Please help me get my message out! pic.twitter.com/NTFVzikzpH

Here’s a video of what happened pic.twitter.com/K1Ymc9zlrQ

The friends I came with. pic.twitter.com/F6wdevOrcN