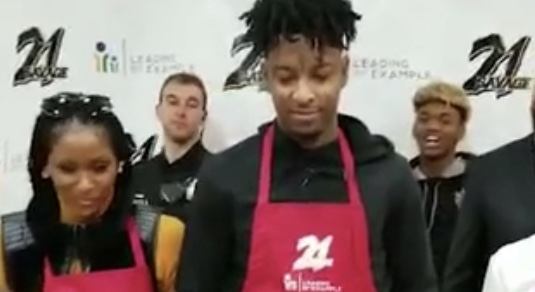 21 Savage always gives back to his city of Atlanta in its local communities and that hasn’t changed at all for this upcoming holiday season. According to TMZ, he gave out 300 Thanksgiving meals to families in Stone Mountain, GA tonight.

The event is taking place at the DeKalb County YMCA center. 21’s mother, Heather Joseph, joined alongside him as they handed out turkey, mashed potatoes, sweet potato casserole, stuffing, mac and cheese and, of course, gravy. This summer, he was in his native East Atlanta area giving out school supplies to children as well.

21 made headlines earlier this year after he was taken into custody by ICE as they found out he wasn’t a documented American citizen and is actually from the U.K. His entered she U.S in July of 2005 but his visa expired in July of 2006. He was able to get out of ICE custody with help from Jay Z’a Roc Nation. 21 still isn’t allowed to travel overseas and is working on his residency. Big salute to him though on the amazing work that he does to help others here in the Atlanta area.

Continue Reading
You may also like...
Related Topics:21 savage, thanksgiving

More in Articles
Joy Bryant stunts for the ‘gram, posting topless photo of herself on IG, and Twitter goes into a frenzy #45andthriving [PHOTO]
Blac Chyna gets jumped in Las Vegas and woman brags, claims she and her cousin beat her up, fan tells Tokyo Toni, who goes off on IG Live, threatening all of them [VIDEOS + PHOTO]