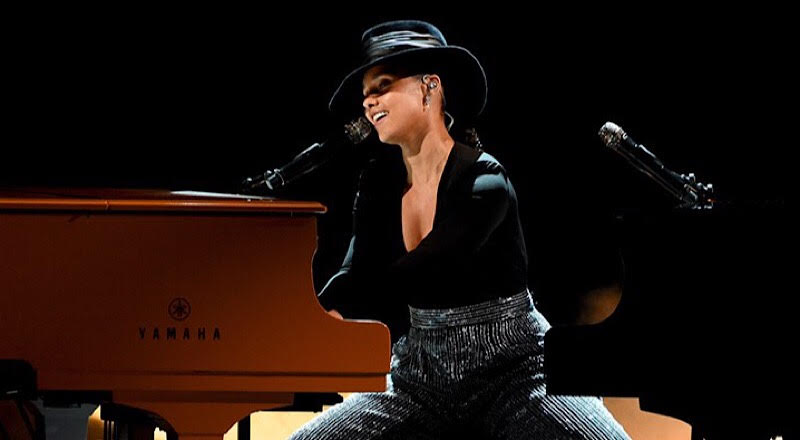 Alicia Keys pulled a double duty last night at the 61st Grammy Awards. Not only did she host host the awards ceremony, the R&B singer stole the spotlight as a performer.

Keys, accompanied by not one but two pianos. She played hits of her own and others by the likes of Drake, Coldplay, Kings Of Leon, Juice Wrld and more all while playing on each piano with one hand. Halfway through her set she stuck to one piano. She kicked off her wide ranging medley of cover songs by paying homage to Lauryn Hill by performing two of her classic records “Killing Me Softly” and “Doo-Wop (That Thing).” She also performed today’s latest rap hits like Drake’s “In My Feelings” and emo rapper Juice Wrld’s “Lucid Dreams.” She concluded her performance with her original hit of her chorus on Jay-Z‘s “Empire State of Mind.”Additionally, she took on Coldplay (“Clocks”), Kings of Leon (“Use Somebody”), Ella Mai (“Boo’d Up”).

The 15-time Grammy winner was talked about non stop all over social media, especially on Facebook. She was the social network’s top talking point during the performance paying homage to pioneering Black pianist, Hazel Scott, say reps for the social media giant. Keys seated between two grand pianos like Scott in the 1943 Mae West film, The Heat’s On, and her special medley definitely left a mark on the 2019 Grammy Awards.

Take a look at Alicia Keys 2019 Grammys Performance below.

More in Hip Hop News
Skinnyfromthe9 Runs Away From Zoey Dollaz After The Two Run Into Each Other In LA; Skinny Claims He Was Ready To Fight Zoey And Eight Guys Before Allegedly Trying To Hide In Someone’s Car [VIDEO]
Cardi B goes off on rant, expressing frustration in people saying she didn’t earn her #GRAMMYs for “Invasion of Privacy,” telling people “I worked hard for this” [VIDEO]