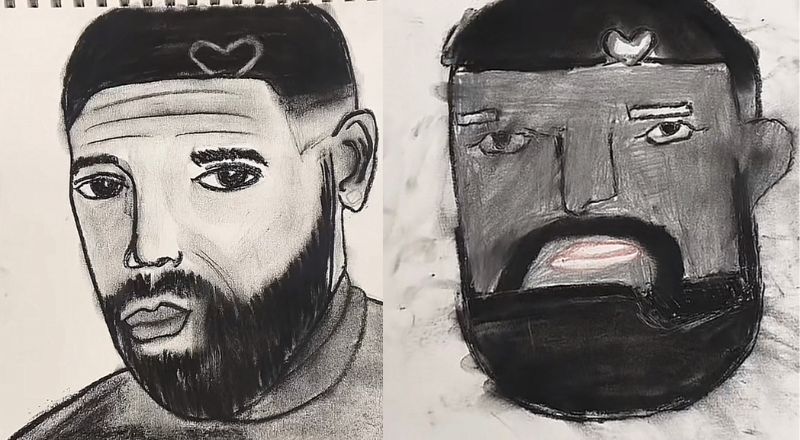 Art teacher has students draw Drake as a class assignment

Drake is a legend in the game and he continues to break records. In a viral clip, an art teacher has her students draw different portraits of Drake for an assignment. The video, via TikTok, shows the picture used for inspiration in comparison to the drawings by the students. Using his iconic “LoverBoy,” era as inspiration, the students take a hilarious but creative approach to the task. Even the teacher made an attempt, placing her drawing last in the video.

Drake’s influence in music and pop culture remains prominent, as he has remained on top for an astounding thirteen years. Taking over 2022 releasing two albums, Drake shows no signs of slowing down anytime soon. Honestly, Nevermind and the 21 Savage collaboration album, Her Loss dominated streaming platforms and Billboard charts. Although, Drake is expected to receive multiple Grammy nominations, he did not submit any of his new work for the 2023 festivities.

Drake consistently breaks streaming records and sells out stadiums worldwide. Clearly, his fanbase continues to inspire cultures and ages of all kind. The teacher who posted the video, frequently gives her class assignments to draw different celebrities. Other drawings include Lil Baby, Lebron James and GloRilla.

Art teacher has students draw Drake as a class assignment

More in Hip Hop News
Yung Miami teases end of her “Caresha Please” show, because of guests being “scared of the smoke”
Boosie claps back at Gabrielle Union by saying Dwyane Wade loves men’s private areas and that she’s a “lil white girl,” after Union said Boosie has “d*ck on his mind” due to dissing Zaya Wade and Lil Nas X [VIDEO]