Home » Hip Hop News » Barbie Tingz, where is it? Nicki Minaj fans on Twitter are upset that #BarbieTingz didn’t make the “Queen” album track listing, but “Rich Sex” and “Chun-Li” did #RichSex #ChunLi 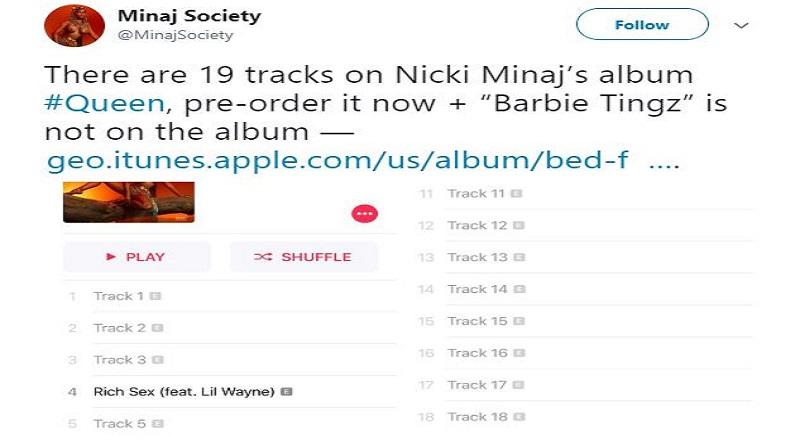 Don’t mess with the “Barbz,” they don’t play when it comes to Nicki Minaj, and they most-definitely don’t play about the new music. After being away for four years, Nicki Minaj is preparing her new album. The album, Queen, is coming on August 10.

To introduce the album, Nicki Minaj dropped “Barbie Tingz” and “Chun-Li.” Both records boast some of her top lyricism in years, but the fans gravitated to “Chun-Li” more. However, most who have heard both say that “Barbie Tingz” is the better song.

Regardless of which song was better, the fans on Twitter are upset about the Queen preorder. The album is available for preorder, but the available songs are “Rich Sex,” with Lil Wayne, “Bed,” with Ariana Grande, and “Chun-Li,” so Nicki Minaj fans are upset this morning and are saying they’ll add it to the playlist.

More in Hip Hop News
Tokyo Vanity posts pic with Ferrari, Blac Chyna’s ex, and says “you won a baby doll,” but the fans in her IG comments are telling her she can do way better #LHHATL [PHOTO]
Robbie Williams giving the finger to the whole world during #WorldCupRussia2018 is the coolest thing ever and Twitter can’t get enough of it! (FULL VIDEO INCLUDED) [VIDEO]