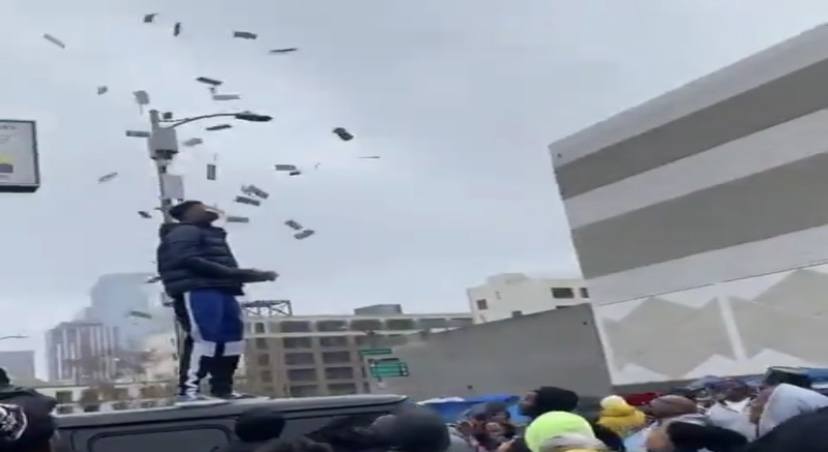 In 2018, Blueface took off as he received his breakout hit single, “Thotiana.” This ended up receiving a remix from YG and Cardi B. This summer, he released his “Dirt Bag” EP which featured Offset, Rich The Kid, and more but couldn’t quite find a single which had the same success as Thotiana.

We’ve been seeing superstars such as Cardi B and Kodak Black give back to local communities and now, Blueface is trying to do the same. He is receiving criticism for his way of going about it though. He was seen in downtown Los Angeles today throwing money to people while he was on top of a car.

Many people on social media feel that this was very disrespectful as he could’ve just handed money to the people. This is a valid point. These people aren’t strippers in a club. This isn’t the first incident that drew controversy about Blueface as he also finally spoke on Nipsey Hussle’s death due to the public asking him to as he said “N*ggas die everyday B.”

Check out. the video of Blueface making it rain in DTLA along with Twitter reactions below.

Rapper, Blueface traveled to Skid Row in Downtown, Los Angeles today to give back to those in need during this holiday season. pic.twitter.com/9L37n9aZdM

Throwing a shitload of money at homeless people. yeah fights and stuff are totally not gonna happen. It would’ve just been better if he had just literally slid everybody there an envelope and not had somebody with a camera filming everything.

He couldn’t hand them the money pic.twitter.com/JSxoU1HW4H

He is not giving out money. He is making a spectacle of poverty.

Continue Reading
You may also like...
Related Topics:blueface, los angeles

More in Articles
Social Media is Dragging TF Out of Zell and Paris for Crying on Part Three of the #LHHH Reunion, Says They’re on Coke
Yandy vs. Chrissy (FIGHT CLIFFHANGER) #LHHNY [VIDEO]