Home » Hip Hop News » Cardi B calls TMZ out, after publishing story about her having a Nicki Minaj diss track, telling them “get off my d*ck,” bringing up how they exposed photos of her daughter, before she wanted to unveil her, accusing them of stalking her, exposing texts with their reporters [PHOTO] 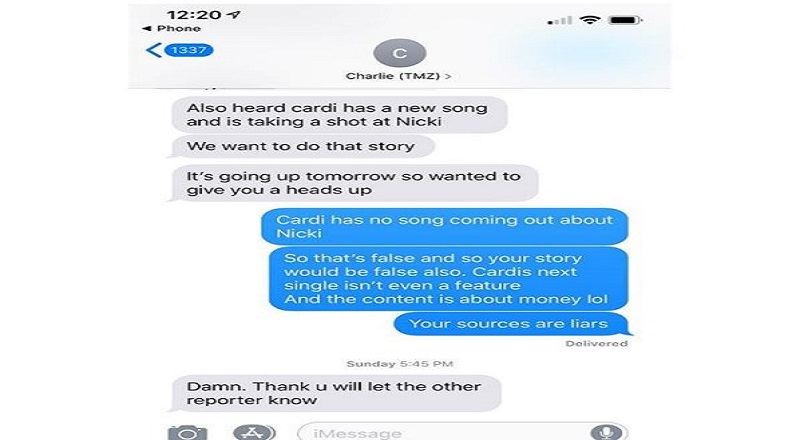 Over the past year, Cardi B has had well-documented beefs with the media. At one point, she even told The Shade Room to not even post her anymore. The rise to fame hit Cardi B harder than it has most people, because of how it happened.

Cardi B spent years being a D and B list celebrity, due to her social media popularity, and being on reality TV. Suddenly, Cardi B went from a reality star to the biggest artist in the game. Whereas most artists see a decline in popularity, Cardi B hasn’t seen that, yet.

Because of this, she has become an even bigger name, as Cardi B continues making hits. According to TMZ, her next single would include a Nicki Minaj diss, something she and her team was fighting over. But, she would take to IG, herself, to blast TMZ for even bringing that up, showing texts where her team told them otherwise, and blasting them for stalking her.

Continue Reading
You may also like...
Related Topics:a-monee, cardi b, nicki minaj, tmz

More in Hip Hop News
Rapper T.I. gets slammed by the White House, due to having Melania Trump lookalike in his music video stripping
Ella Mai talks being discovered by DJ Mustard, following the success of “Boo’d Up,” and more on #TheBreakfastClub [VIDEO]