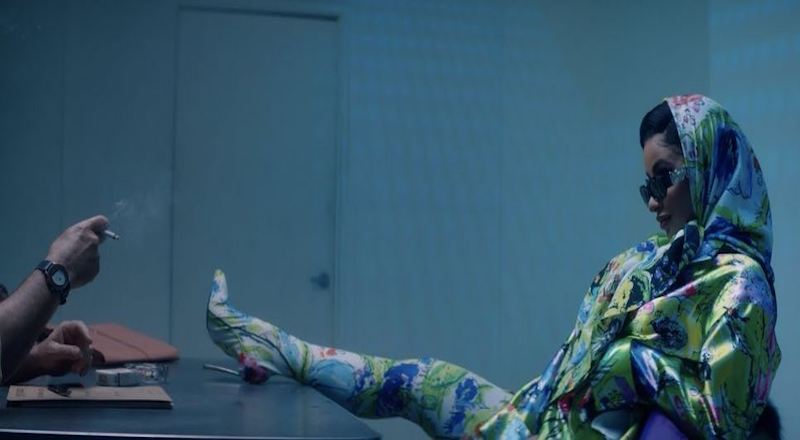 That may be true. Cardi B may not need anymore press but following the release of her most recent fiery yet explicit video, one can only expect to see her name scattered throughout headlines. The release of this intense visual shows and proves that Cardi is not afraid to push the boundaries when it comes to fashion, beauty and overall entertainment.

In the clip, it’s as though Cardi is reenacting real life situations as she faces police interrogation and hoards of fans. As the video continues, Cardi is later seen stripping down completely naked as her nipples and private parts are blurred out. Her dancers also strip down to perform in the nude before leading into the next scene where they lay dead bleeding out while she continues to rap.

To wrap up the visual, Cardi ends up in jail, drowning and killing a fellow inmate in the toilet. Looks like the rapper left behind a trail of blood in her latest video. Check it out below.

The single release of Cardi’s media criticizing “Press” arrived May 31st, following up Cardi’s 2018 one-off single, “Money” and “Please Me” collaboration with Bruno Mars. Along with “Clout,” her other 2019 collaborations include “Twerk” with City Girls, “Wish Wish” with DJ Khaled and 21 Savage as well as “Rodeo” with Lil Nas X.

Amidst all the music, Cardi B is in some legal trouble, having been indicted on 14 charges, including two felonies, for a strip club brawl that took place last August in New York. The rapper allegedly ordered an attack on two bartenders that ended in physical injury, in which she’s pleaded not guilty. The case is still open and we will keep you updated as the story develops.

Continue Reading
You may also like...
Related Topics:cardi b, Press

More in Hip Hop News
Mack Wilds was pulled over for his tinted windows, but got arrested for driving with a suspended license
Carmelo Anthony Responds to Reports That He’s Cheating on Lala With Mystery Woman on Yacht; Claims The Woman is Married and The Rumors Are “Affecting his family” [VIDEO]