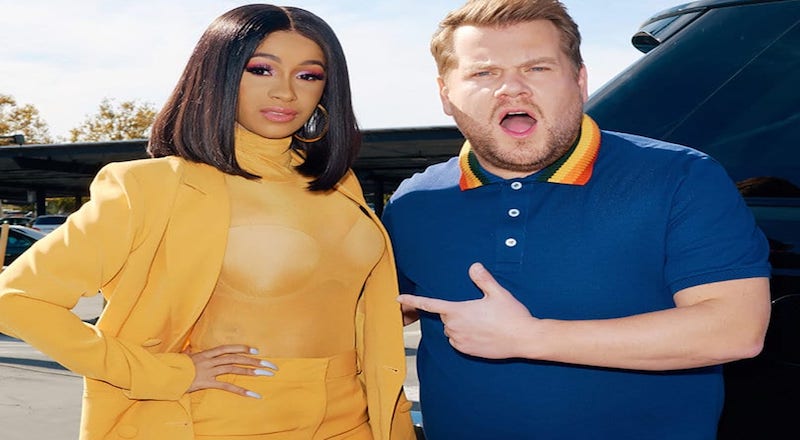 On last night’s (December 17th) “Late Late Show with James Corden” episode the bonafide Bronx femcee, Cardi B had her comedic skills on full display during the “Carpool Karaoke” segment. Cardi not only came dressed to impress in her head-to-toe yellow outfit from her FashionNova line, but she brought the jokes! James and Cardi covered several songs from her Grammy-nominated “Invasion of Privacy” album like “Bodak Yellow,” “Drip,” “Be Careful,” “Bartier Cardi,” and her latest banger, “Money.”

In the episode Cardi is seen having the time of her life as she blurts out the window to bystanders saying things like:

“What’s up children! Stay in school! Listen to your mom!”

“Tell your mommy to buy my single!”

“Stay in school or you won’t be getting no Christmas gifts!”

The two then go on to discuss the variety of luxurious whips that Cardi has purchased since her huge success. While going through the lists of cars, she states how she doesn’t know how to drive, leading Corden to pull over to give her a driving lesson.

“You can’t drive,” Corden says. “So, what’s the point of you having cars?”

Cardi replies, “To take pictures with it.”

After the hilarious driving lesson came to an end, Cardi and Corden then hijack a senior citizen dance class to perform her single “I Like It.” While crashing the senior party, an older gentleman took the opportunity to shoot his shot at Cardi!

Watch the full segment below:

A post shared by The Late Late Show (@latelateshow)

More in Hip Hop News
Mariah Lynn blasts NBA Youngboy for texting her about Skinnyfromthe9, sending threats, telling him “I will smack y’all little kids, like y’all my f*cking sons and daughters” + Says she never heard of him, looked him up, and saw video of him beating his girlfriend #LHHNY [VIDEO]
50 Cent and Dream Doll Clown on Social Media About Her Fall From Her Hazardous Balenciaga Crocs