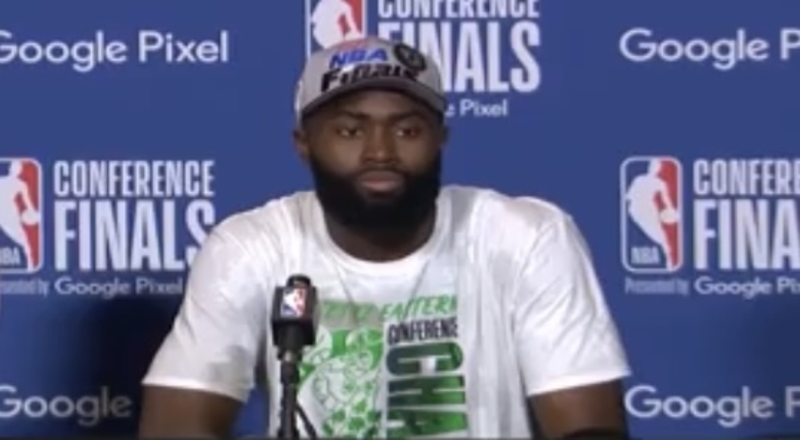 A few days ago, it was revealed that Los Angeles Rams supertsar, Aaron Donald, signed with Kanye West’s Donda Sports brand. That was reportedly for off-field ventures, per TMZ. This also comes two months after naming Antonio Brown as Donda Sports President.

Now, Kanye has officially signed his first athlete to Donda Sports, and it’s another superstar. According to TMZ, this is Jaylen Brown, of the Boston Celtics. This deal reportedly got done, when Kanye met with Jaylen, at the Warriors vs Celtics game, two months ago.

Kanye and Jaylen took a photo after that game, as well. Jaylen sported a Donda Sports hoodie, while taking a photo with A$AP Ferg that night, too. That night, the Celtics blew out the Warriors on the road, 110-88. These two teams will also meet in the NBA Finals, on June 2.

Among the factors of why Kanye signed Jaylen, were reportedly due to his success in the NBA, as well as his intelligence, social activism and charitable work. Ye is also impressed with Jaylen’s close relationship with God. Kanye also wants to take Jaylen to a “superhero” level, during and after his NBA career.

Jaylen was taken with the third overall pick in the NBA Draft, in 2016. He had played one year at California, before being a top three pick. Jaylen made his first NBA All-Star Game appearance, in 2021.

More in Hip Hop News
Keri Hilson performed “Turnin’ Me On” at Hard Rock Cafe and reportedly doing shows for $2,500
Pharrell announces “Cash In Cash Out” single, with 21 Savage and Tyler, The Creator, coming on June 10