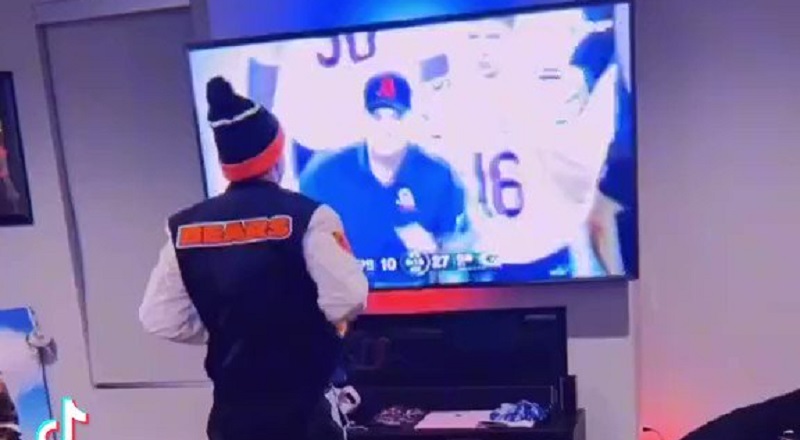 It is tough to be a dedicated sports fan. Anyone who isn’t will never get it. When a person invests in a favorite team, regardless of the sport, it always is that serious. Any team who beats the favorite team is the opps. This is where a fan of the Chicago Bears found himself. On Sunday, the Bears lost to the Packers. This man’s girlfriend just didn’t get it.

Heading into Sunday’s game, the Chicago Bears were favored to beat the Green Bay Packers. Those who watched the game saw that it didn’t play out like that. Instead, the Bears lost in blowout fashion. The Packers won a comfortable 27-10 game. As a result, this Bears fan was all the way in his feelings. Meanwhile, his girlfriend was in the background laughing at him.

Watching the end of the game, the man was reduced to tears. The whole time his girlfriend was laughing at him and recording him. After that, the woman asked him why he was crying when she told him the Chicago Bears were going to lose. The man told her the Green Bay Packers cheated. First, he vented about the Packers. Second, he told her that he let her know to not speak to him after the Bears lose. After her repeated jokes, the man told her he’s been a Bears fan for twenty two years, while he’s known her for two months. Finally, the man just told her to get out.

“I known you for 2 months, this been my team for 22 years.” I felt that. pic.twitter.com/huiPvqJu6H

More in Hip Hop News
Tupac Shakur statue in Stone Mountain, Georgia catches major backlash on Twitter, as people said it looks nothing like the iconic rapper
Future sold his song publishing catalog in eight figure deal for music spanning between 2004 and 2020 and his catalog is worth $75 million