Home » Hip Hop News » Chrissy Teigen is being dragged for the filth, called “the most annoying person on Twitter,” after she posted the Kim K woods GIF, commenting on Rhymefest, with people telling her to mind her own business about black Chicago youth, blasting her for defending something she knows nothing about #Kimye 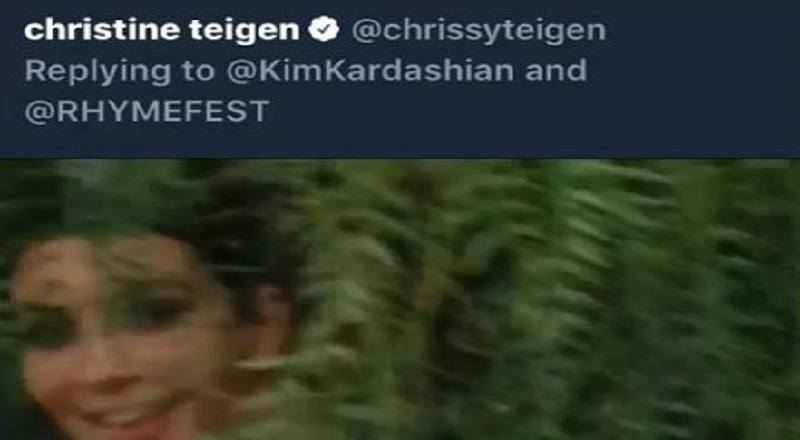 The above photo is the reason Chrissy Teigen is being targeted, right now, on Twitter. Last night, Kim Kardashian lit into Rhymefest, over his comments about Kanye West. Because of her controversial lifestyle, people jumped all over Kim for commenting on the situation.

As a wife, Kim defended her husband, like any wife would. The difference is that she and Kanye are celebrities, and the fight is over impoverished black youth in Chicago. By all accounts, Kim Kardashian was born rich and made a fortune, via reality TV.

Chrissy Teigen, over the years, has become a good friend to Kim K and Kanye, due to being with John Legend. However, this whole Chicago situation is something most felt she should have stayed out of. Instead, she posted the GIF of Kim in the woods, which is popular, but Twitter tore into her, calling her every name in the book.

Read the tweets about Chrissy Teigen below:

More in Hip Hop News
Kim and Kanye get trashed by Twitter after Kim Kardashian went in on Rhymefest for what he said about Kanye West, and fans side with #Rhymefest, saying Kim “doesn’t give a F about black people,” calling them “trash” and “narcissists,” and accusing them of only caring about money
#DondasHouse issued statement to overturn their entire operation to Kim Kardashian and Kanye West; Their website is now no longer in use