Home » Hip Hop News » Christina Stock shares Facebook video of protest, in Buffalo, NY, ruined by a man who jumped out of his truck with a bat, threatening protesters, later revealed to be Jay Stachowski, a Correctional Officer with the Erie County Sheriff Department [VIDEO] 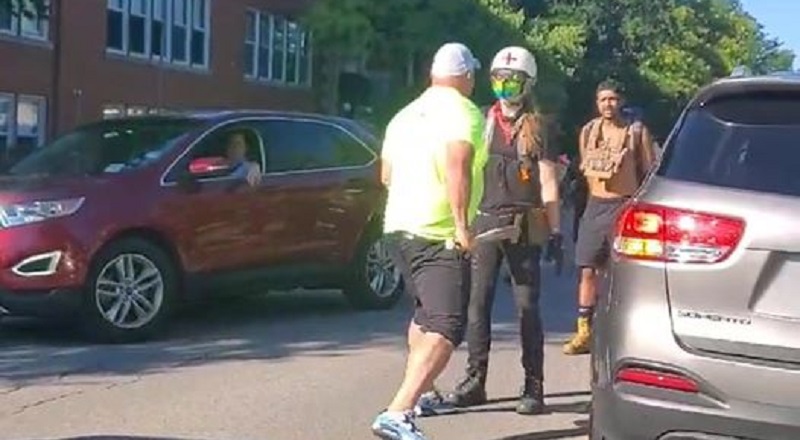 Most of the protests going on in America are peaceful, despite what is being portrayed by the mainstream media. There are many trying to make it look like the country is burning to the ground. Make no mistake, there have been riots, but that isn’t the entire story.

In Buffalo, New York, there was a peaceful protest taking place in front of a high school. When tension arose, it was not a protester, it was an officer of the law, according to some. This man was off-duty and he was the source of all of the problems.

Christina Stock was a part of history, sharing a Facebook video of the protest, which took place in front of her high school. In the middle of this protest, a man jumps out of his truck with a bat, confronting a protester, accusing him of. hitting his truck. After the video went viral, a woman named Hannah Holden identified him as Jay Stachowski, an Erie County Sheriff’s Department Correctional Officer.

Watch the entire video and find all of the details below:

More in Hip Hop News
Juelz Santana Was Able To Get Out of Prison Early With Help From Meek Mill After He Contacted Santana’s Wife, Kimbella, With an Attorney
Fivio Foreign Speaks on Allegedly Being Shot in Atlanta During Day Party and Confirming He Was Okay After Going To Restaurant – “I Don’t Stay Safe, I Stay Dangerous and I Move Around With God” [VIDEO]