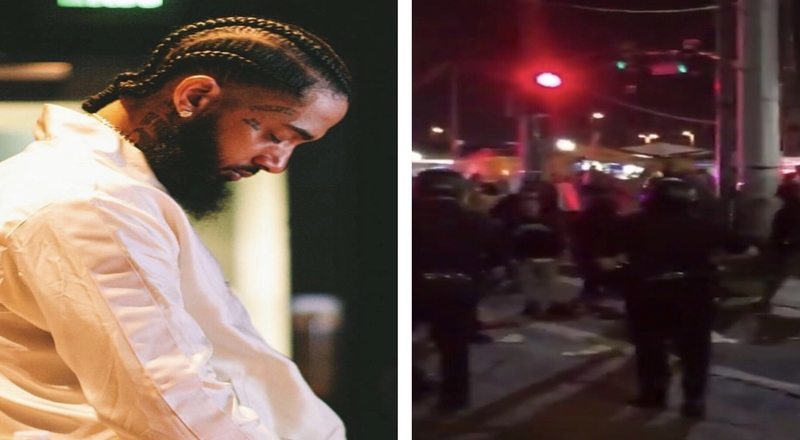 It’s been over 24 hours since hip-hop lost Nipsey Hussle and everyone is still mourning heavily. It’s been reported that the man who shot Nipsey multiple times was someone he knew. Tonight in Nipsey’s hometown of Los Angeles, a vigil was held. It took place in from of Nipsey’s The Marathon Clothing store where he was murdered.

Things turn horrible quickly though as according to ABC 7 Eyewitness News’ Veronica Miracle, a loud noise had the crowd running for their lives with many saying it was a sound of gun shots. This erupted in a large stampede resulting in many injuries. One person was reportedly stabbed as the Los Angeles Fire Department transported 19 people, per spokesperson Margaret Stewart to USA TODAY.

Steward said that no gun shots occurred. As far as injuries to the crowd, they were minor as many were trampled.

This is completely disgusting. Someone who did everything he could to help his community along with a west coast legend was being honored tonight and it just had to have violence continuing.

Check out the aftermath of the shooting and stampede at the vigil below.

At least one person is injured. Blood everywhere next to this person. The stampede at @NipseyHussle’s memorial may have started because of a loud noise that people thought was a gunshot. @ABC7 pic.twitter.com/tnuKIsZi9d

We’re hearing multiple people are injured and at least three are stuck in the middle of this crowd, unable to get help. That’s why officers are trying to clear the area. Also, the entire city is now under a tactical alert. @ABC7 pic.twitter.com/4uFjYpsfOO

More in Hip Hop News
Kandi Burruss returned to #LHHATL tonight AND she’s Akbar V’s cousin; Twitter gave Kandi props for always helping, but said she won’t get that money back on that investment, but at least she got a VH1 check
Suspect Eric Holder Wanted By LAPD For Homicide In Shooting and Killing Nipsey Hussle #RIPNipseyHussle