Home » Hip Hop News » Dame is better than Russ, and he knows it, according to Twitter; #NBATwitter goes in on Russell Westbrook for his flop, swinging on Damian Lillard, and whining when Dame hit him back #NBAPlayoffs 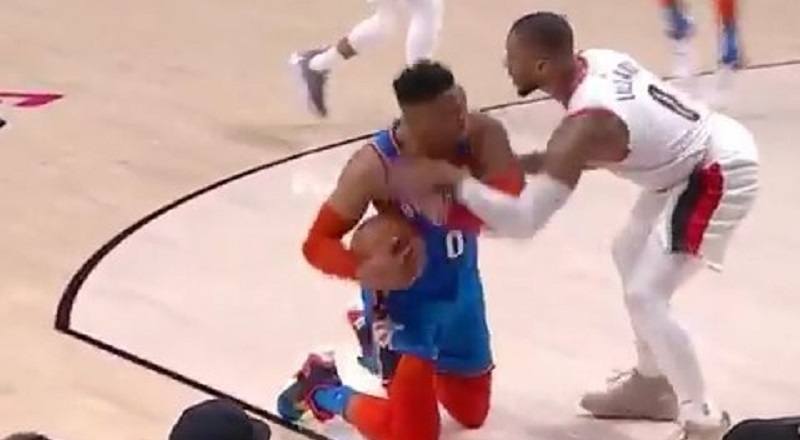 Drafted in 2012, Damian Lillard has played things quietly, in the background, over the years. A couple of years ago, Damian Lillard set a goal of the Portland Trail Blazers winning over 50 games, and going to the Conference Finals. Obviously, that didn’t happen.

Last season, the Blazers were a complete disappointment, as they had home court advantage, and got swept by the Pelicans. This season, again under the radar, Damian Lillard led Portland to a 53-29 record. In the playoffs, they have the Thunder, beating them in Game 1.

Damian Lillard has Twitter in an uproar, after Russell Westbrook tried him, tonight. When Westbrook lost control of the ball, Dame went for it, but Russ swung on him, leading to a Lillard shove. Fans on Twitter got upset, when Westbrook whined to the refs over it, and then said Dame is better and Westbrook knows it.

Things are getting physical between Dame and Russ pic.twitter.com/KAZhU9Wbbp

Read the tweets about Damian Lillard and Russell Westbrook below:

More in Hip Hop News
Denver Nuggets Jamal Murray puts the team on his back in 4th quarter #NBAPlayoffs #DENvsSAS
Kenya Moore is negotiating her return to “The Real Housewives of Atlanta,” Eva Marcille will keep her peach, while Shamari DeVoe gets demoted #RHOA