Home » Hip Hop News » Doja Cat Goes On Instagram Live and Denies Being on Tinychat With White Supremacists But Acknowledged That There Are Some On That Website; Also Denied Mocking Police Brutality Victims on “Dindu Nuffin” Song [VIDEO] 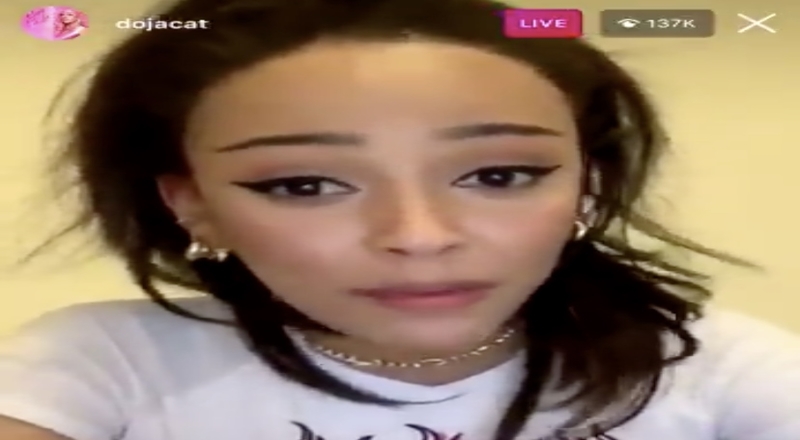 Over the weekend, Doja Cat was canceled on social media due to her being on Tinychat with white supremacists and stripping for them. She also recorded a song in 2015 titled “Dindu Nuffin” which was was believed to have mocked police brutality victims. Doja explained in an Instagram statement that people used that term to hurt her but she tried to “flip its meaning.” She also finally took pride in being black as she mentioned her South African heritage.

“I understand my influence and impact and I’m taking this all very seriously,” Doja said. “I love you all and I’m sorry for upsetting or hurting any of you. That’s not my character and I’m determined to show that to everybody moving forward. Thank you.”

Doja just now went on IG Live in the early hours of Tuesday morning as she explained the Tinychat situation. She mentioned how it’s a public chatroom and how there are racist people in and out of there but end up getting banned. She also denied it being a white supremacist chatroom and doesn’t understand why that’s the case.

Doja went on to acknowledge that there is more racism on Tinychat than any other social media app because it’s less monitored. She also explained how she did try to take back the Dindu Nuffin meaning and that her lyrics did not make sens. Check out Doja speaking on the accusations along, the Instagram statement, speaking on Dindu Nuffin and her on Tinychat below.

Doja Cat addresses some of the rumors floating around about her on Twitter: https://t.co/1ae16zUt0Y pic.twitter.com/x56rAC0BiL

Doja Cat broke her silence on Instagram Live to talk about the recent attention she’s been getting. In this clip she speaks on the song “Dindu Nuffin” pic.twitter.com/J9v4j8RLOt

Continue Reading
You may also like...
Related Topics:doja cat