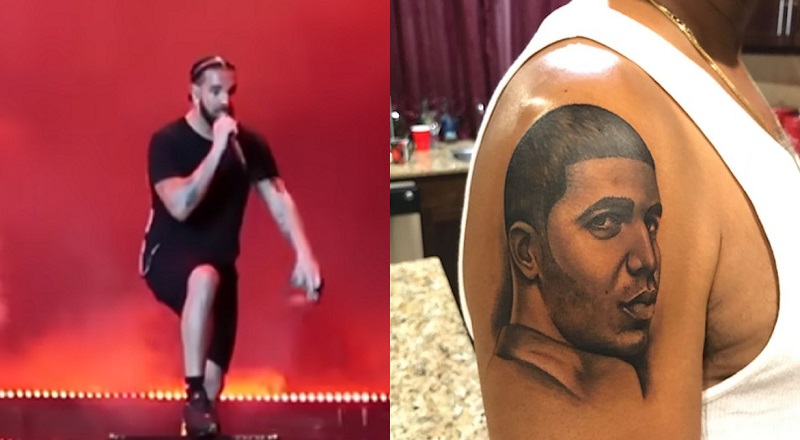 Drake is riding a twelve year high as the biggest rapper in the game. This past weekend, Drake celebrated his historic run. For one night, Drake reunited with Lil Wayne and Nicki Minaj. Their concert was billed the “Young Money Reunion,” and Drake got it in.

Drake changed the game, with his debut album. On Thank Me Later, Drake told his life story, which was different than most rappers. The album’s opening track, “Fireworks,” saw Drake speaking on his parents filing for divorce. At the age of five, Drake saw his father walk out.

Drake called his father out, accusing him of guilt tripping on the album. During the 2010s, Drake began to form a bond with his father, Dennis Graham. Now, Drake and his father are beyond close. At one point, Dennis Graham followed in his son’s footsteps, recording a hit single in his senior years. Now, Dennis Graham is paying homage to his son, with a tattoo on his arm. The tat is supposedly of Drake, but the resemblance is almost nonexistent. As a result, Drake clowned his dad’s tattoo.

More in Hip Hop News
21 Savage responds to fan, who thinks it’s hypocritical that 21 says people in Atlanta need to stop gun violence, even though he raps about guns
Raymond Thompson charged in the fatal stabbing of Ashley Lockhart in Philadelphia