Home » Hip Hop News » Ebro officially takes a side in Nicki and Remy beef; Twitter trashes him after he says “No Frauds” is better than #ShETHER and Remy’s rhymes over a used beat were 💩 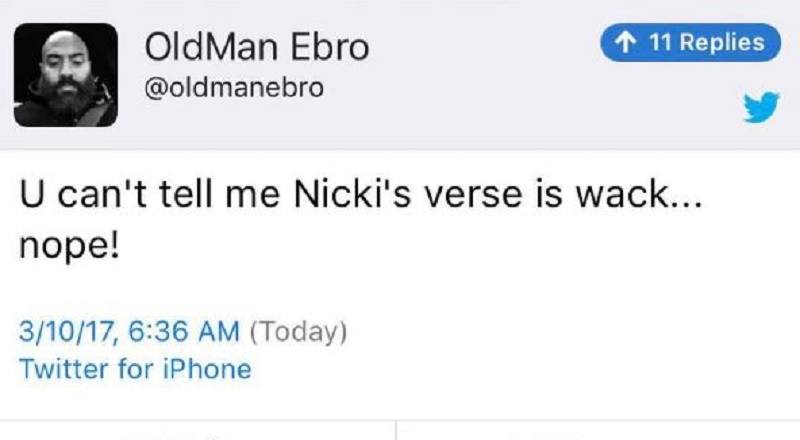 Perhaps the smartest move Ebro made was stepping down as Hot 97’s program director to become a personality. The move has resulted in Ebro being one of the biggest names in radio. Outside of “The Breakfast Club,” it can be argued that Ebro IS the biggest name.

Even if he’s not, it cannot be denied that Ebro is a major topic of discussion. After “ShETHER,” Remy Ma made him into a leading topic, when she accused Nicki Minaj of sleeping with him. Giving props to the song, Ebro called Remy Ma out for lying, later on.

This morning, Nicki Minaj hit back at Remy Ma with “No Frauds,” her record with Drake and Lil Wayne. After hearing this song, Ebro took to Twitter with the above tweet, following it up with another one, that says “No Frauds” is better than “ShETHER.” As he continues to tweet, Ebro is catching heat from everyone, as they are saying he must’ve gotten with Nicki.

Read the tweets about Ebro below: