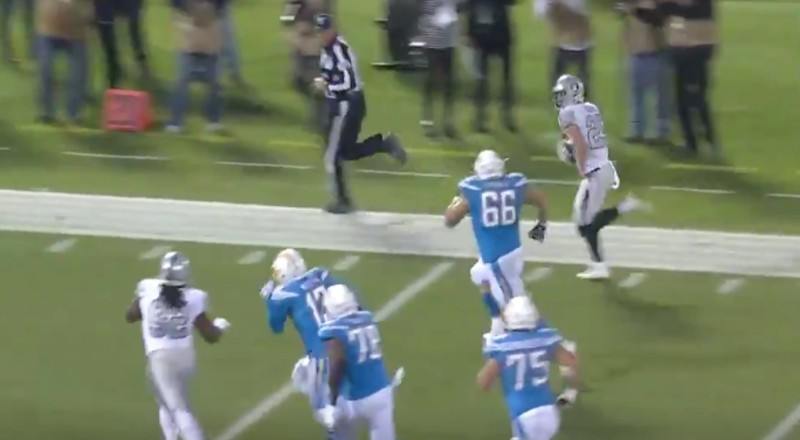 Football fans had a chance to get acquainted to Raiders safety Erik Harris after his awesome first half performance in tonight Thursday Night Game. What got a lot of eyes aimed him tonight was his two interceptions against Chargers QB Philip Rivers. He even took one back to the house for pick-6 touchdown. Harris has definitely had a night.

More interesting than his star performance, Harris’ journey to the NFL has captured the hearts of football fans making him the darling of the night. Twitter soon became enamored with Harris’s underdog story. Harris wasn’t really sought after for football coming out of high school. He actually had more track and field scholarships. He ended up as a walk-on at Division 2 school California University of Pennsylvania. He went undrafted in 2012 with no minicamp invites. With no football in his immediate future at the time, Harris went back home and worked in a potato chip factory, and then as a UPS supervisor while earning his degree. Hearing of an opportunity, Harris traveled 3 hours for a CFL tryout. This led to a 3 year career in the CFL, and finally a shot at NFL. From a potato chip factory to intercepting Philip Rivers twice in one game, who doesn’t love a  great journeymen story.

More in Articles
Running Back Josh Jacobs Scores Late Touchdown Run To Put Raiders Back On Top With A Minute Left #LACvsOAK #RaiderNation
Cardi B meets up with stranger, a Nicki Minaj fan, “Barbz,” to fight, in the middle of NYC streets, gives her location out, sharing several videos via Twitter, as fans call her crazy + Call her out for having security with her [VIDEO]