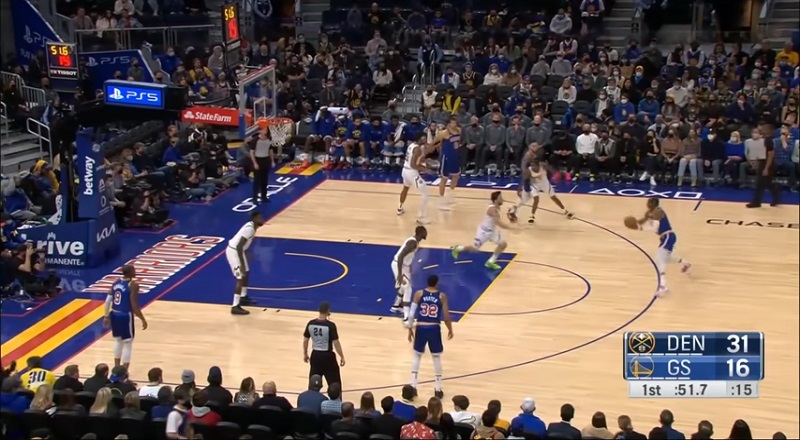 Thus far, the Golden State Warriors have surprised the NBA, retaking control as the league’s best team. Tonight, though, the Denver Nuggets are giving it to them. With Draymond Green out, fans on Twitter are saying Steph Curry can’t win without him.

Steph Curry is the biggest star in the NBA, but he’s faced tons of criticism. Despite being the Warriors’ best player, he’s never won Finals MVP. This comes in spite of him having won three championships and two MVPs.

During the Kevin Durant years, Steph Curry took a step back to allow him to lead. That produced two championships, where Durant won both Finals MVP awards. After his departure, the Warriors struggled, primarily due to injuries, and have now returned to form.

Last season, Steph Curry began playing insane basketball. Individually, he played like his 2016 second MVP run. This season, he is playing more like his 2015 initial MVP run, and the Warriors are winning like it’s 2015. But, Draymond Green is out of tonight’s game. Since 2016, people have credited him for being the “heart and soul” of the team.

Tonight, the Warriors are getting blown out, and Twitter is giving Draymond Green the credit. On Twitter, fans are saying that Steph Curry can’t win without Draymond.

More in Hip Hop News
Taye Diggs gets roasted for his latest TikTok on Twitter [VIDEO]
Kim Kardashian gets trashed on Twitter for spoiling “Spider-Man: No Way Home”