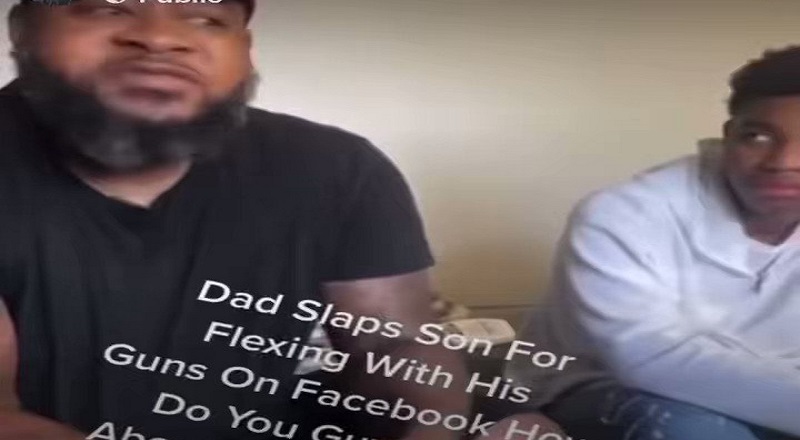 Social media is home to some dangerous trends. A large number of them come from images portrayed by rappers in their videos. As a result, the children who came after them have tried to emulate what they have seen from others. Sadly, this has put weapons in the hands of the wrong people. Many people too immature, too young, or all of the above, have access to weapons. There was one father who was not having that, after he found out what his son was up to.

When it comes to the hip hop community, people are quick to point out the problems. In addition, people are quick to point out problems in the Black households. A typical assumption is that there are no Black fathers. As a result, hip hop is blamed for being a problem. However, those who have found success in hip hop have become multi millionaires. Whatever the case, there is one young man clearly influenced by hip hop. After his father found out how big the influence was, he took charge.

On Twitter, there is the video of the father hitting his son across the face. The father did this because he learned his son was on Facebook posing with weapons that he owned. Regardless of it being a weapon, or not, it is never wise to show off personal belongings on Facebook. So much of what this child did was so wrong. As a result, the father went as far as going on Facebook Live, where his son often shares videos, to embarrass him in front of his friends. However, some are questioning if the man went too far.

More in Hip Hop News
Joel Embiid elbows Giannis Antetokounmpo in the stomach and gets a Flagrant 1 called on him; Doris Burke gets dragged on Twitter for her comments on it [VIDEO]
DaBaby shuts down rumors of coming to fans’ jobs and offering free tickets to help with his concert sales and attendance