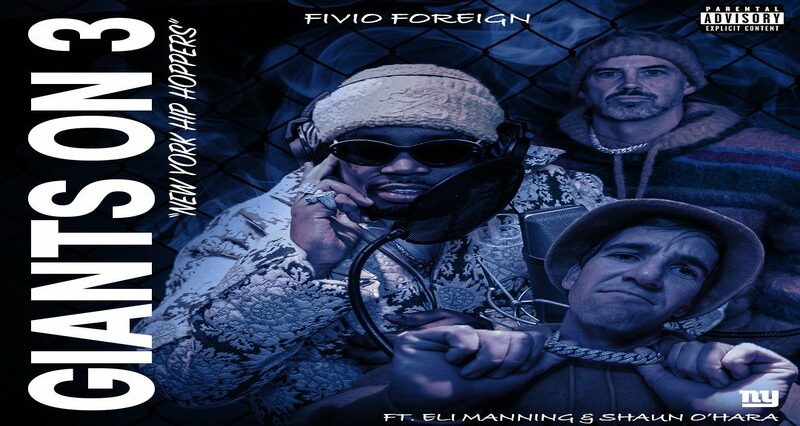 On Wednesday, Fivio Foreign posted to his Instagram stories, of his meeting up with several New York Giants legends. This included Eli Manning and Shaun O’Hara, as they went to the studio with Fivio. There, they went viral, for taking shots with the Brooklyn rapper. Eli was seen in a Celine outfit, as he also sported a Cuban link chain.

Eli and Shaun actually went on to record a song with Fivio. They ended up making a New York Giants remix, of Fivio’s “1 On 3” song. Instead, this one will be titled “Giants On 3.”

Giants On 3 is also going to hit streaming platforms, soon. Fivio went on to post a clip of Eli and Shaun in the booth, recording this remix. The cover art was unveiled, as the Giants also reposted it, on social media.

This summer, Fivio also released his debut studio album, “B.I.B.L.E.” This project contained 18 songs, including the “City Of Gods” single with Kanye West and Alicia Keys, as well as “What’s My Name,” with Coi Leray and Queen Naija.

Check out Fivio Foreign recoding “Giants On 3” with Eli Manning and Shaun O’Hara, below.

More in Hip Hop News
Fort Lauderdale Beach is flooding, due to Hurricane Nicole [VIDEO]
Bankroll Freddie listed in 61-count indictment, due to drugs and firearms charges, with 34 other defendants