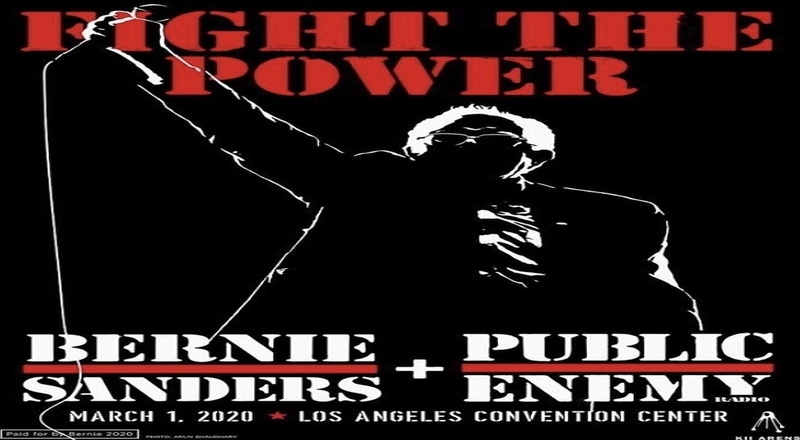 Earlier this week, 2020 Democratic Presidential candidate hopeful Bernie Sanders’ Instagram account posted that Public Enemy would be performing at his Los Angeles rally today. Chuck D has been supporting Sanders but it appears that his former group mate, Flavor Flav, isn’t at all as he didn’t show up today.

“We have become aware that Flavor’s bandmate and Public Enemy co-creator, Chuck D, has endorsed Bernie Sanders’ candidacy for President and plans to perform at an upcoming Sanders Rally,” said Friedman. “While Chuck is certainly free to express his political views as he sees fit – his voice alone does not speak for Public Enemy. The planned performance will only be Chuck D of Public Enemy, it will not be a performance by Public Enemy. Those who truly know what Public Enemy stands for know what time it is, there is no Public Enemy without Flavor Flav.”

Friedman maintained the stance that Flav would not perform at the rally. Flav has also not endorsed any particular candidate for president in the election that takes place in November.

“Sanders has promised to ‘Fight the Power’ with hip hop icons Public Enemy – but this Rap Icon will not be performing at the Sanders Rally. “To be clear Flav and, by extension, the Hall of Fame hip hop act Public Enemy with which his likeness and name have become synonymous has not endorsed any political candidate in this election cycle and any suggestion to the contrary is plainly untrue.

Chuck D has since slammed Flav in a response to Billboard by saying “Flavor chooses to dance for his money and not do benevolent work like this. He has a year to get his act together and get himself straight or he’s out.” Chuck’s lawyer also said that he could perform as Public Enemy if he wants to, which did happen tonight.

“He is the sole owner of the Public Enemy trademark,” said Chuck’s lawyer. “He originally drew the logo himself in the mid-80’s, is also the creative visionary and the group’s primary songwriter, having written Flavor’s most memorable lines.”

Chuck rocked the stage in LA tonight in support of Sanders and even compared Donald Trump to Adolf Hitler. Check it out below along with the original flyer for the rally and performance.