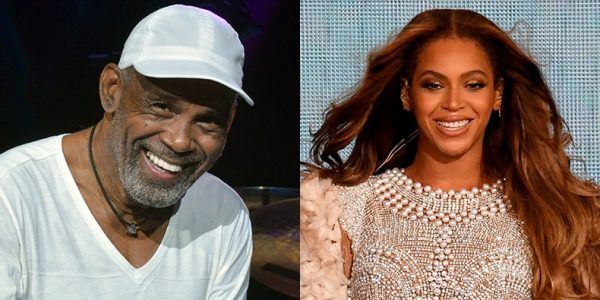 Beyoncé is making sure she gives her flowers to living legends while they are here. Her remix to the classic ‘Before I Let Go’ has started a worldwide dance craze and she has nobody to thank but Frankie Beverly and Maze for making the song possible.

Beverly recently talked to Billboard about how Beyoncé’s version of his hit song is changing his life.

Let’s go back to when you first heard that Beyoncé was interested in covering this song. Did someone from her camp call you?

Well, that’s kind of the shocking part of it. She’s a great friend of mine, but I didn’t know she was going to do this. I was hearing stuff, but I didn’t even want to approach her about it. She kept it quiet, until her people called me one day maybe a week or two ago. When they played it, that’s when I heard the first draft of it, and I was blown away. It’s a blessing. It’s amazing how she works, she’s very smart. I’m caught off guard, but in a beautiful way. She’s such a sweet person too. She’s a very sweet, religious kind of person. Then the way she just released it, it’s off the chain. She’s done so much, this is one of the high points of my life.

How far in the past do you and Beyoncé go back? When did you first meet?

We met years ago. I think she was in her teens at the time, if that. I guess she really liked Maze and the song even then, so her mother brought her to our show at the Houston Rodeo. I met her then for the first time but didn’t know much about her. She wasn’t a big hit star then, but we wound up working together a few times since and she’s always been very, very nice to me. This cover was just like she is. She didn’t make a big deal out of doing this song, and that’s just the way she works. I love the way she does her thing.

What inspired you to write and record “Before I Let You Go” in the first place? Take me back to that moment in your life and career.

Boy… It was about a relationship I was in. It was just up and down, and by the end of it I wrote a song because I was feeling I needed to get out of it. I was so into the girl, but it just wasn’t working out. I was thinking, ‘What am I gonna do?” and that thought inspired the song. I was going to try to do all of these things “before I let go.” It was a situation I had to get out of, but I was in love. It came out of me pretty good, too. Even the music, it was all a gift from God. Today me and the girl are still close, but we don’t see each other like that. But it was as real deal love type of thing.

I think one of the things that makes this song unique is that it’s about a sad and stressful subject matter, but musically and the way you sing it, it’s actually very carefree, smooth and laidback.

Yep, plus it’s an uptempo song. When I think back on it, I was really in trouble, but what came out of me was this big, uptempo song that was really a love song. It’s funny.

“Before I Let Go” came out in 1981 and it was a respectable hit, but what do you make of the fact that this song has lasted through subsequent generations? This is something that came from this tough personal experience of yours, yet here we are 38 years later and it’s still connecting with people.

Yeah, that is a good point. I just thought it was a great little song, but I never thought it’d be all this. It really changed everything for me. It was a huge song at the time, and it’s one of those things this band will be able to carry on forever.

I wonder if you’re getting reactions from people in your past, or even people who weren’t previously familiar with Maze catalog who are now diving in and discovering you for the first time?

Yes, I think you hit it right on the head. I feel bigger than ever! I feel like I have a huge smash out there. It’s definitely a blessing. Other people have done my songs, but the way she did this was in a class of its own. I’m hearing from people I haven’t heard from in years. She’s done something that has affected my life. I haven’t even spoken to a publication like yours in quite a while. So it’s changed things around for me.

How are you feeling Beyoncé’s version of ‘Before I Let Go?’

More in Articles
Erica Mena Says She Doesn’t Know The Words to Any Nicki Minaj Song and Says She Copied Everything From Lil’ Kim; Barbz Pull Up Old Tweets That Prove Otherwise [VIDEO]
ScHoolboy Q talks not censoring things for his daughter, Nas calling him the best out, and new album on “The Breakfast Club” [VIDEO]