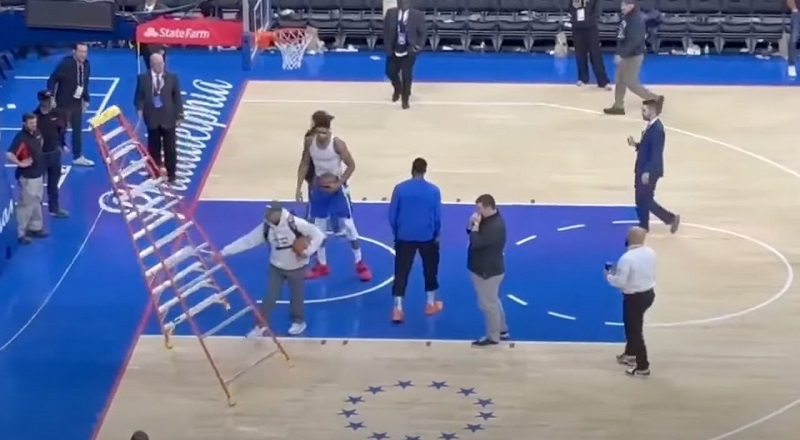 Giannis throws ladder down so he can shoot free throws

Giannis Antetokounmpo established himself as the NBA’s best player, years ago. However, his journey into NBA superstardom is different from most other stars. It’s not like any of it matters, as Giannis proved himself to be who he says he is, when he led the Milwaukee Bucks to the 2021 championship. In the closeout Game 6, Giannis had a historic game, dropping 50 points.

Giannis Antetokounmpo has long worked, slowly improving each aspect of his game. As he improved, the Bucks became perennial playoff contenders. Despite the consistent growth, the Bucks were never more than a 40-win team. As a result, they kept losing in the first round of the playoffs. In 2019, Giannis delivered an MVP year, leading the Bucks to 60 wins, and the Conference Finals, losing to Toronto.

Giannis Antetokounmpo and the Bucks went through a tough 2020 season. Despite compiling the NBA’s best record, the Miami Heat upset them in the bubble. After losing two years in a row to the team that went to the Finals, Giannis went and won Finals MVP. In 2022, the Bucks struggled in their repeat attempt, losing to the Celtics in Game 7. This season, the Bucks had a hot start, but have come back down to Earth. Last night, they lost to the Sixers in Philly. After the game, Giannis was trying to take free throw shots, but the ladder was in the way. In the end, Giannis knocked the ladder down.

Giannis throws ladder down so he can shoot free throws

Giannis throwing down the ladder and disrespecting the employees of ⁦@WellsFargoCtr⁩ after losing to the ⁦@sixers⁩. pic.twitter.com/DBrRu1nq7K

More in Hip Hop News
Fourth suspect in Young Dolph murder case, Jermarcus Johnson, is in custody after turning himself in to police
Kyrie Irving donates $65,000 to family of Shanquella Robinson, after Robinson passed away in Mexico, as many believe that her friends targeted her during their trip together