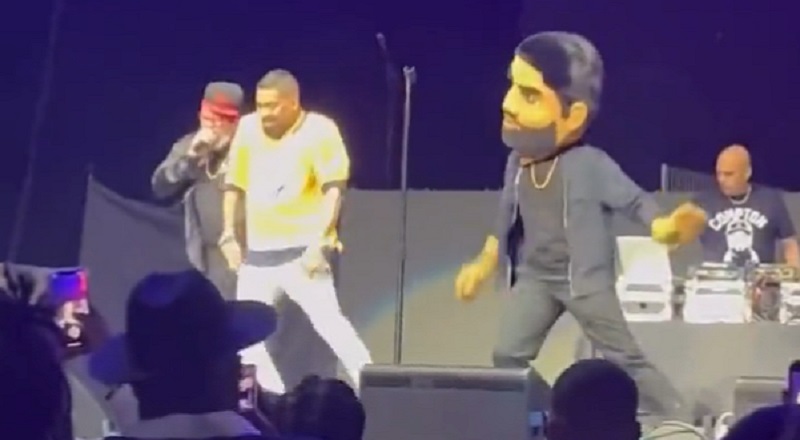 Ginuwine does his infamous dance with lookalike mascot at concert

Ginuwine took the game by storm, in 1996. With the release of “Pony,” he topped Billboard Hot 100. In addition, he became a household name. During that time, Ginuwine helped introduce the “Timbaland sound” to the world. This was the template for future hits from Aaliyah, which ended up cementing Timbaland as a legend. Meanwhile, Ginuwine proved to be more than a one hit wonder, himself.

Ginuwine is a truly talented artist, as he does it all. Not only does Ginuwine make all kinds of songs, but he is also a gifted dancer. Some have argued if Gin was actually the most talented R&B singer of the late 1990s and early 2000s. Whatever the case, Ginuwine made hits during his prime. Currently, he is enjoying his career as an “old school artist.”

Ginuwine began going viral for doing his dance. In the eyes of most people, the dance was something new. However, there were some who went back and watched “Pony.” There, fans saw Ginuwine doing the dance. The fans learned the viral dance is actually something he has been doing for 26 years. During a recent concert, Ginuwine took it one step further. As he performed, Ginuwine did his dance, but had a mascot with a Ginuwine head on, doing the dance right beside him.

Ginuwine does his infamous dance with lookalike mascot at concert

I know Ginuwine didn’t go and get a mascot 🤦🏽‍♂️…. pic.twitter.com/xSoSMvVSW4