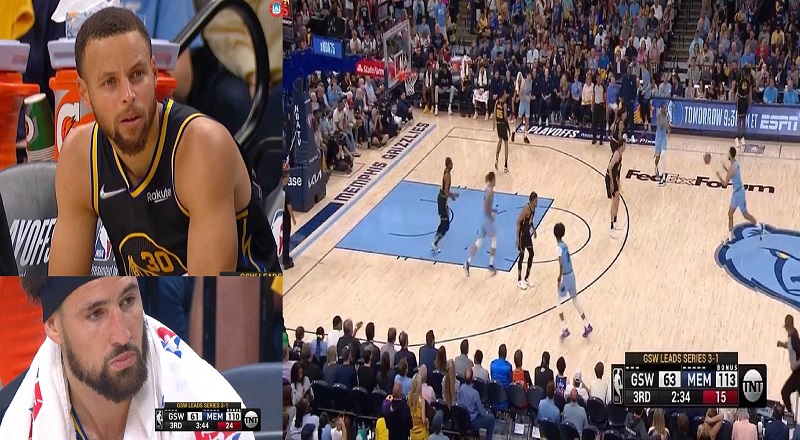 Golden State Warriors are down 55 points to the Memphis Grizzlies

Ahead of tonight’s game, the Golden State Warriors wanted to set the tone early. In each game, the Memphis Grizzlies have gotten off to fast starts. This was something the Warriors intended to change. However, intentions do not always pan out.

The Warriors had a lot of momentum, after Game 4. After being behind twelve points, in the fourth quarter, the Warriors won. Stephen Curry hit clutch free throws and then Draymond Green got a key block. This left the Warriors with a 3-1 series lead.

Going into Game 5, the Warriors expected a win. However, the Memphis Grizzlies are looking to send the series back to San Francisco. Despite the Grizzlies not having Ja Morant, they remain a good team. The Grizzlies got off to a good start, against the Warriors. Midway through the second quarter, the Warriors had a complete meltdown. The Grizzlies turned a six point lead into a seventeen point lead. Sadly, it was down from there.

By the third quarter, the Grizzlies had a fifty-five point lead over the Warriors. Given Golden State’s championship aspirations, Game 5 is a complete shock. On Twitter, fans have plenty of jokes about the Warriors being historically blown out. As a result, Golden State is preparing for a Game 6.

Golden State Warriors are down 55 points to the Memphis Grizzlies

More in Hip Hop News
Gunna’s lawyers disapprove of lyrics being used against Gunna, in indictment
Blac Chyna gets baptized, on her birthday, after losing $100 million defamation lawsuit that she filed against the Kardashians, and kicking woman in the stomach at a bar [VIDEO]