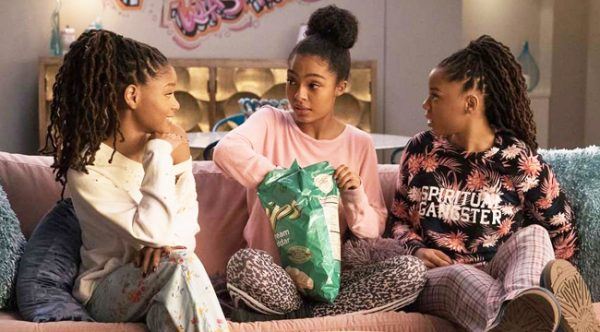 A bomb was just dropped on us. A new video teaser from the hit show, grown-ish, revealed that one of the girls on the show, will find out she’s pregnant this season. You can’t tell who is in the actual video, but we have made some guesses as to who could actually be pregnant this season.

Ana was getting it in with Aaron before he eventually told her he didn’t want to be with her. If she found out she was pregnant from him, after he and Zoey rekindles their relationship, it will be interesting to see what happens between these roomies. Ana has been very political on the show, the writers could also do an episode where she struggles with her Republican beliefs when it comes to getting an abortion. Plot twist.

Jazz and Doug are now back on good terms. It would be a crazy storyline for her to be pregnant and lose her track scholarship.

Zoey and Luka honestly had the weirdest relationship and we never really saw them get intimate on screen. I honestly don’t think she’s the one who is pregnant, but we can never be sure. If she is pregnant and it’s Luka’s baby, what will happen with her rekindled relationship with Aaron? Hmm.

Sky didn’t have a man, but she was getting cozy with Zoey’s brother in a few episodes. They could be trying to write sis off so she can go fulfill her duties as the new Ariel.

Who do you think will be pregnant this season?

new semester. first trimester. whose is it?