Home » Hip Hop News » Halle Bailey was turned white in “The Little Mermaid,” after fans used a filter to change the skin complexion of Bailey’s Ariel 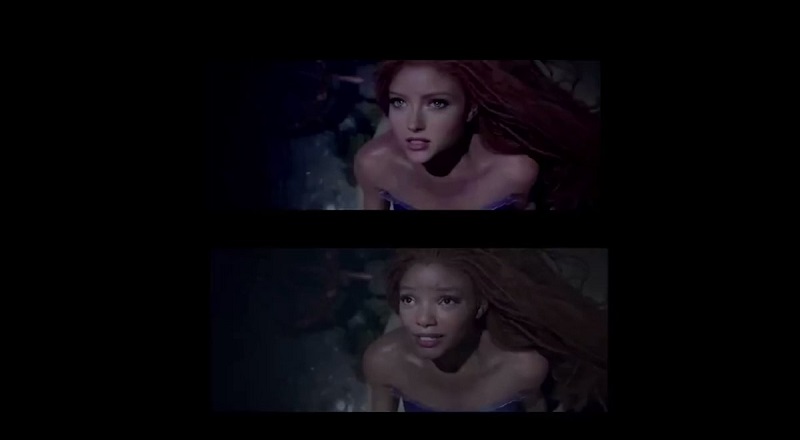 Halle Bailey recently made major headlines, when she was cast as ‘Ariel’ in The Little Mermaid in the live action version of the film. When Bailey was cast as ‘Ariel,’ she made history as the first Black woman to take on this role. As a result, there was a lot of backlash over her taking this role on.

Halle Bailey has seen still images of herself as ‘Ariel’ all over the internet. There are many think pieces going on about her playing the role of ‘Ariel.’ Most importantly, those who actually watched the movie believe Halle Bailey did a good job playing the role.

Halle Bailey sees herself inadvertently in the center of controversy, however. Not everyone is pleased about her playing ‘Ariel’ in The Little Mermaid. As a result, much discussion centering on Bailey has trended on social media. On Twitter, a video has gone viral of Hailey Bailey. Someone edited some of the footage, from The Little Mermaid. Artificial intelligence, along with some filters have the image on the top, which was originally Bailey, looking like a white woman.

Continue Reading
You may also like...
Related Topics:featured, Halle Bailey, the little mermaid

More in Hip Hop News
R. Kelly found guilty on six of 13 charges, in Illinois child pornography case
Stephen Curry is closing in on $1 billion lifetime deal with Under Armour