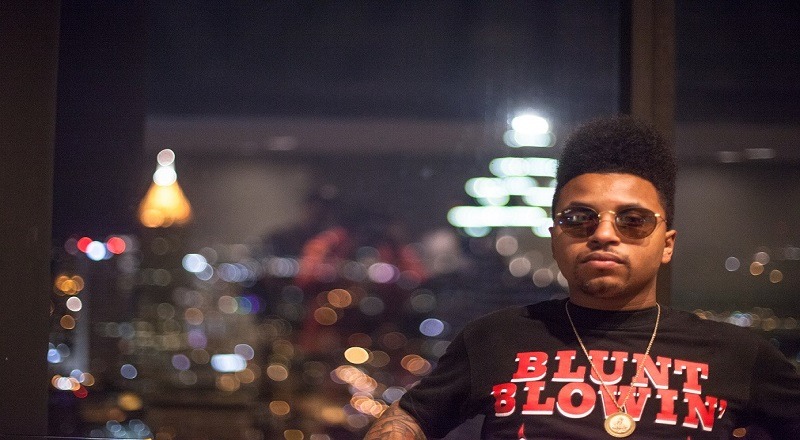 A name many may be familiar with on the underground scene is Buggs Tha Rocka, who has made his rounds, working with many of the biggest names. Among the people he has worked with includes Talib Kweli and his legacy goes without mention. Meanwhile, Buggs is recently removed from the release of Scattered Thoughts of an American Poet.

Recently, Buggs Tha Rocka took time out to talk to Hip Hop Vibe and he discussed his new album. An interesting title, Scattered Thoughts of an American Poet, is what he chose to name his album. Buggs Tha Rocka discussed this, working with Talib Kweli, and the growing hip hop scene in his city.

Whats good Buggs? Take a minute to tell the readers a little about your sound and what they should expect from you as a musician. I’m a fan of the Golden Era of hip hop, 90s rap, so I focus a lot on actual lyrics and pop culture references I grew up on. Also, I’m fan of many different styles and genres of music, so you can hear that in my hip hop as well which separates me, or certainly makes me different from a lot of the artists that are out there at the moment.

How long have you been involved with Hip Hop and where did the inspiration come from that created Buggs? I’ve been involved all my life. Music has always been in my household, there’s a lot of musicians in my family. Life, in general, has inspired my creative process so it’s just something instilled in me to make art.

What do you consider the true embodiment of hip hop? Me! I think I represent what that is, to be fearless and keep evolving your art. To maintain originality, go against the grain and speak from the heart.

So far what would you say has been the biggest thrill that you have experienced being indie? Being able to perform at sold out shows, whether that’s been with John Mayer, Talib Kweli or Young Jeezy or many more over the years. My influences are diverse so I don’t place limitations on my music or who I work with, I won’t allow people to place me in a box.

How did you end up being affiliated with Talib Kweli and what is it like working with a legend? Honestly, it came about via mutual friends and artists, like Donte from MOOD. He is also another legend, and just grinding and developing my skills. I earned his respect and caught his ear so he offered me the chance to come on a tour. I did the Midwest dates and things kinda blossomed from there. To keep it short, he followed me on Twitter then reached out and then we had a meeting in my city Cincinnati the rest is history.

When I think of Cincinnati Hip Hop I automatically think of MOOD and Hi Tek. What is your favorite track or moment from any of the their albums? “Karma” from Mood and Hi Tek and of course “The Blast” with Kweli when they were Reflection Eternal. Crazy big records!

Can you tell us about the creative process of Scattered Thoughts Of An American Poet? I went to Amsterdam and just kinda collected my thoughts. It grew from there and I created the first three songs. When I got back I just took my time and let things shape up organically. It was important that I worked with producers and artists I had developed personal relationships with rather than it being a manufactured situation. As a result there is a strong representation from my home city and it also reflects many of my musical influences. So as an album, it’s a wide spectrum of my thoughts and musical styles. It took just over a year to put it together.

When it comes to artists most value different aspects of a successful career. What do you value most and gauge your success on? Being respected by the people I respect and who influenced me, so I consider myself already successful in that regard. I have released a lot of material in the past that brought recognition like my mixtapes with DJ Clockwork and Mick Boogie, and my debut solo album Mutant Level 5 which featured guys like Little Brother, Tanya Morgan, Freeway and the UK’s S.A.S. I’ve performed at festivals and with some huge names over the years which was dope, but I still want more. I’m never content.

If you could collab with any producers or artists that you want on just one album who would make the cut? That’s so hard to answer. I love a lot of producers and for different reasons, but I’ll say overall Kanye West and Pharrell Williams, cause both are great producers and artists at the same time.

Can you tell the people how they can find you on the net and on the social networks? Twitter, @BuggsThaRocka; Facebook, @BuggstharockaMusic; Instagram, @BuggsThaRocka. My website www.BuggsThaRocka.com, which has everything from me. I recommend everyone visits the site to stay updated on everything I’m doing, its my own galaxy!