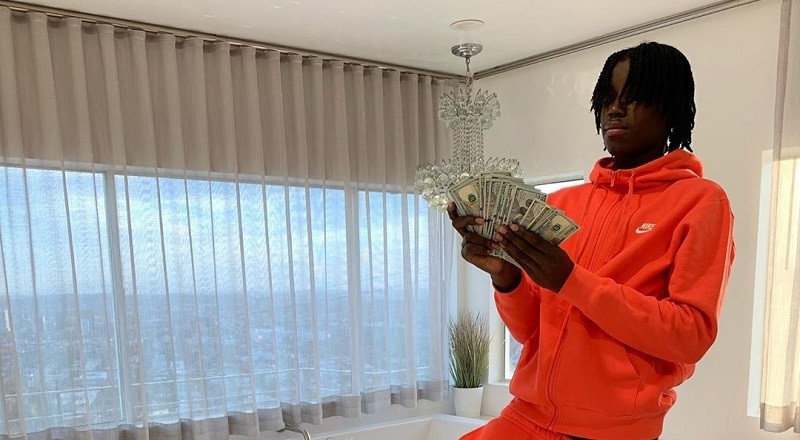 With the fans anxiously waiting for more, the 16-year old rapper dropped EP titled Who TF is Melvoni?  this past week while all were in quarantine, which feature five tracks that are dripping with grimy NYC style, catchy hooks and an overall unique vibe that you simply cannot skip through. Period.

We recently hopped on a call with Melvoni as he told us a little more about who TF he is.

Congrats on the EP, Who TF is Melvoni? Brilliant title! Was it your idea?

No but I took part in it – we were all just brainstorming for a title and randomly it came to one of my guys, he was like you need a title to make people say Who the f*** is Melvoni?? I was like, “What? It can’t literally just say that – maybe Who the “t” “f” is Melvoni..”  That’s it! Who TF is Melvoni.

And we ran with it.

Having a dope beat carries most artists a long way today – they don’t have to talk about much. You, on the other hand, have something to say and it’s relatable! Who influenced you growing up?

When I was younger, I listened to a lot of Michael Jackson. I didn’t know who he was until his death. My Mom was crying and upset… her reaction to him dying was crazy! She didn’t even know this man! So I went and did research on him and became a big fan myself. It was the moonwalk moves that made everyone go crazy, so I was always practicing – constantly watching his videos and singing his songs.

I always loved Lauryn Hill too, but as I got older, I started listening to more street sh** – Oh! And I f*** with Akon too.

I do think they would support me but only to a certain extent. They always felt like I was good from the beginning – but if I wasn’t good, my Moms would still support me, but she would likely force me to go to school or something else that would set my future.

Do you think that it’s the talent that gains an artist the attention needed or connections in the industry or both?

To be honest, I believe that good music only makes up a small fraction of what a successful artist is. What I really think makes an artist successful is the connections definitely – there’s way more to it than talent. Regardless of whatever you have to have the music. That’s how you last long.

You get put on faster with connections but you need talent to survive.

You mentioned in a recent interview that you promised your mother that you would never join a street gang, so you created your own gang. Young M.A. actually did the same thing. Do you believe that being a leader like that is a key factor in becoming successful?

I’m a leader at heart, but I never act like I’m better than anyone. I do fill leadership roles.

There literally isn’t a track that I haven’t liked on your EP. On one of your songs, “BIG ROCKS” you mentioned that you’ve come a long way & you’ve changed your mindset. Tell us more about that mindset change. What did you change your mindset from and to what now?

I would say that I’ve mellowed down a bit. I’m constantly watched now so I can’t do the same things that I used to do. I don’t include myself in drama – there are times I’m dragged into stuff – But now I see things differently. I’ve kind of cooled down a little bit. The other day I saw online how this guy clowned this girl, saying she was pretty, but she was a bum because she didn’t have no money. He was showing off how he had a thousand dollars and she was broke. Now when I was younger I may have been like, “Yo! My son getting’ money!” because a thousand dollars was a lot of money to me! Now I see that and I’m like that’s f***ed up!

I’d rather just have a positive mindset, you can never act like you’re better than the next person. I say all of the time growing up I didn’t know I was poor – we were all in it together because the reality is we are a minority.

What’s your favorite social media platform and why?

FACEBOOK! When I was younger, I was actually against social media.

I thought it was dumb! Nothing good comes out of this! When I got older It was entertaining! It is fun to watch! I don’t like to involve myself too much, but I do like to watch!

Facebook was where I promoted my music when I was just starting out.

I get a lot of love on Instagram now too.

I like the studio. I’m in the studio every day. It’s where it all happens at, you can do whatever you want – you can sleep there, you can make music, you can impress a girl – the studio is where it’s at.

Ten years from now, where do you see Melvoni?