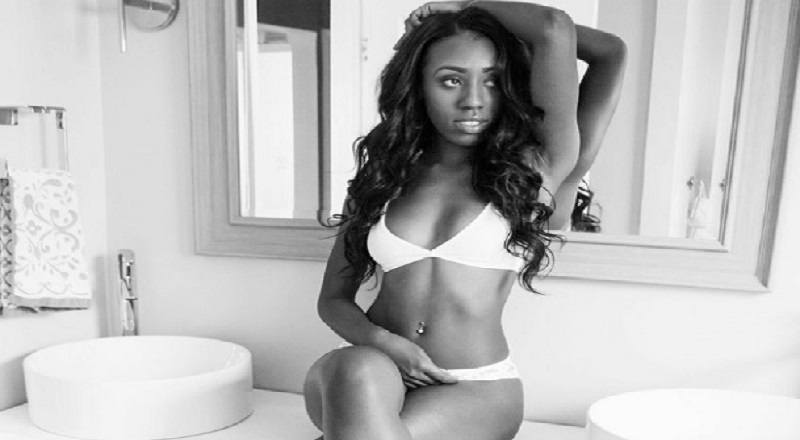 During the second half of the summer, VH1 introduced something that wasn’t a part of either the “Love & Hip Hop” or “Wives” franchises. As a network known for daring to be different, such as building around Flavor Flav, VH1 had to come different. They came very different with “Dating Naked” and the series was a major hit.

A recent episode featured a lady by the name of Moenay and she’s becoming a popular entertainer. Being on “Dating Naked” helped expose Moenay to an even bigger audience and they saw her make a play for love. After watching people on television, sometimes people want to see more of them, at least one person did with Moenay.

Hip Hop Vibe had the opportunity to talk to Moenay and she discussed her recent television appearance. Moenay starred on “Dating Naked” and this definitely helped her gain a much bigger fan base. She talked to Hip Hop Vibe about being on the show, her goals in life, and much more.

What was it like filming on the show, “Dating Naked?” Filming the show was amazing. I was given the opportunity to fly to Panama to a island by the name of Bocas Deltoro. The beaches were breathtaking! The Panamanians were humble and welcoming to us. The only downside to my experience were the crazy amount of BUGS! I’ve seen bugs there that were the same size of an iPhone (laughs).

Being naked was liberating! I’ve always been comfortable in my own skin, so I knew this show was perfect for me. The production was beyond professional which made it a lot easier. Going on a blind date naked was a little nerve-racking at first, but, in a weird waym I found myself bonding quicker because there weren’t any clothes to hide behind. I think when “Dating Naked,” you are forced to be real.

On the show you seemed like you had a hard time finding love. Why do you think that is? I think the reason I was having a hard time finding love was simply because of the options I was given. Although Mike and Dan both are great guys, I didn’t have much of a connection with either of them. I also think it just wasn’t my time and the right person for me wasn’t in Panama.

After your episode aired, how did you react to knowing that the guy you were pursuing had sex with the other girl? To be honest, I wasn’t surprised at all, considering I was sleeping in the bedroom right next to them and could hear them having sex all night. After meeting both Mike and Stephanie, I knew that they were a match. Even though the show made me look upset and jealous, in reality I was happy for them both. Those two are perfect for each other.

How did your family react after they saw you on the show? My family is very supportive. After the show aired, my family was very proud with how I carried myself. My distant relatives all reached out congratulating me and reassuring me that I will find love one day.

How has beeing on reality TV impacted your personal life? Being on reality TV impacted my life in many ways. I was actually overwhelmed with Facebook messages and emails from fans who shared how much they could relate to my story. The amount of positive feedback I received is amazing. My dating life has been more interesting lately, guys are asking me out left and right. I’ve decided to take a break from dating and to focus on myself.

Tell us about working as a cruise line entertainer. Working on a cruise line is challenging, because I am away from my friends and family for half of the year. But, considering that I’m given the opportunity to perform every night and my job is to make sure our passengers are enjoying themselves and having fun, the job is well worth it.

Moenay seems like she has a freaky side. Besides being naked what kinds of adventurous things does Moenay enjoy in behind closed doors? Like I said on the show, I like using mirrors and I’m very spontaneous and adventurous, but a lady never tells, so I’ll just leave it at that.

On the episode, I saw on VH1, all of the guys you had blind dates with were white guys. Do the brothers have a chance with Moenay and if so what is your ideal man? As a black woman, of course I date Black men! But, when it comes to finding love, I am willing to date all types of men. I am very open minded and known to try anything once. Race doesn’t play a part in finding LOVE.

What is your ultimate goal in your life and career? My ultimate goal in life is to achieve happiness. I want to travel and explore the world and make as many crazy memories as possible. As for my career I plan to continue pursuing dance which is my number one passion. I also plan on opening my own business.

More in Hip Hop News
Give Me That: Webbie hangs out with Snootie Wild and Wankaego [PHOTO]
Wiz Khalifa accuses Amber Rose of cheating on him with their driver