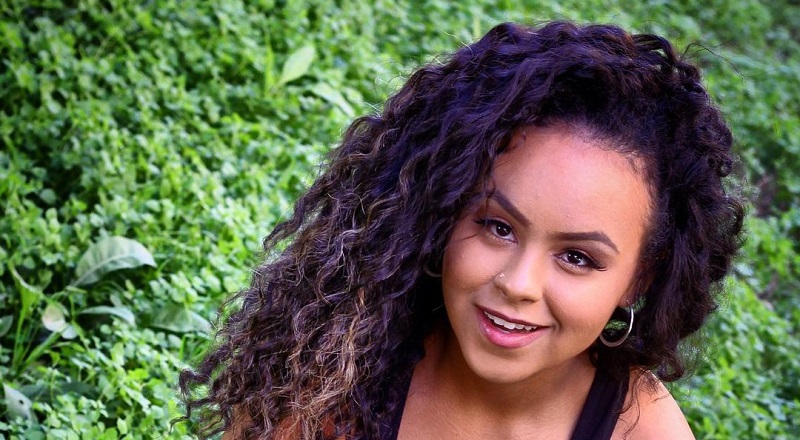 One of the hottest up-and-coming artists in the game is Natalie Nichole. Currently in LA, she comes by way of San Antonio, Texas. To get where she is, Natalie Nichole has made all kinds of sacrifices.

Before getting into situations, where she had the chance to work with Nick Cannon and DJ Symphony, Natalie Nichole was homeless. All of this was a part of her journey, aiming for greatness. Still, she knew moving to LA was the move.

Natalie Nichole recently took the time out to do an interview with Hip-HopVibe.com. During this conversation, she spoke on being homeless in LA, after moving there from San Antonio. She would also speak on her work with Nick Cannon and DJ Symphony.

Can you tell us how you got the nickname, The Queen Dove? My nickname? That’s just one of my nicknames but like all of my nicks it happened organically. I had several nicknames for my supporters throughout the years like “Doves for life” but then one day they decided to name themselves “Dove Nation” so I went with it and then they began to call me “The Queen Dove” so I ran with it. To me, it was flattering that they crowned me with that name because to me naming them “doves” to begin with came from a pure place. I felt they returned the same energy.

You were homeless, for close to a year, in Los Angeles. What did you learn, during that period of time? To be honest, that experience for me was a time of reflection. I have always been a really positive person no matter what kind of obstacle or trial I’ve ever faced from racism, molestation, growing up without a father, and so on, so when I got hit with homelessness, it was just another test to pass. I was raised to have an extremely strong faith in God and rely on Him through everything, even in the good times. So, in that time, I just kept doing what I always do, work hard, inspire as many people as I can along the way, and never give up, no matter how it was looking. I feel if anything, since I was isolated to a certain extent living out of a car, in all kinds of weather, I was able to look at myself, and get out tons of content, from scripts, to music ideas, I feel I was holding in, because I hadn’t had a chance, before that, to really dive into myself, without interruptions. I was able to free myself through creativity and really let go of some traumas, or personal habits, or ways of thinking that I needed to break. Some people would’ve broken during a time like that I feel my trials only make me stronger and able to survive anything.

Growing up in San Antonio, Texas, how did that city help shape your sound? I didn’t care for the city, at first, to be honest, but it definitely grew on me. I moved to SA when I was like four years old. San Antonio is my hometown in my eyes even though I was born in Lubbock, Texas. From the hospitality to the lively festivals and family essence I feel San Antonio shaped me to be loving, respectful and tough all in the same. As far as my sound outsiders would have you thinking 210 is country and Tejano only but in fact it’s super diverse in culture and music. I was listening to everything growing up from rap, RnB, oldies, country, punk, Spanish etc. I write all genres of music so maybe that’ll tell you how it shaped me.

How did you end up working with Coco Jones? I attended an ASCAP convention in Hollywood and met some producers and writers that were writing for Jones and invited me to the session, so I brought my catalog. Coco really was digging my records, but the men in the room wanted to go another direction to me that made no sense. I was like twenty years old and she gave me her phone number, because I think she saw how I wasn’t really being valued the way I should’ve been with my penmanship but overall, that’s how we connected.

What was the experience like, working with Nick Cannon? It definitely was an experience, to say the least. I did a lot of records in that camp that never came out. A few did, but not everything. I feel Nick’s team didn’t know what to do with me, my work ethic, my intellect or my talent so they kind of sat on me. I was behind the scenes, very little if even that. I got to go to “Wild ’n’ Out,” at the Tyler Perry Studios backstage in ATL where I also was in the studio every day for like two weeks, writing and recording records that never saw the light of day, through Nick, until I dropped the unmixed/unmastered versions for free on SoundCloud, three years later.
We filmed a music video “Simple” that never dropped out there too. With that said, the ones I dropped on my own years later weren’t even all the records I wrote and recorded while around them. While in ATL it was late 2018 and I was homeless again but in Texas instead of L.A. and the guy Nick had me in contact with who ran his music department ignored me all the time for whatever reason. When Nick wanted to help me, financially, to get back on my feet ,that dude Nick had in charge never saw it through. I don’t think that guy ever liked me to begin with honestly, because I’d ask questions that everyone else was afraid to ask. When things didn’t make sense, I’d bring it to Nick’s attention and that dude hated that I’d call him out, but I wasn’t around to play games. I was a young twenty-one year old but I wasn’t stupid. I just wanted to work. I never wanted a handout and I guess that dude didn’t like that I held him accountable for everything he said and he could never lived up to anything he said.
I actually have to thank that dude, though, because of his neglect, my manager found me and I did everything and more that I wanted to do, while in Nick’s camp on my own under my own label “Indience Music Group” and by the grace of God. I think people thought that situation with Nick was supposed to “Make Me” but it didn’t help me much at all. I had to build myself up with my manager and even show my manager what I was capable of. In the beginning in 2019 my manager constantly told me “it’s, a lot of work you have to be ready and stay consistent.”
I warned him that I’m a hard a** worker and I didn’t have to be babysat. I’m the type of person that follows through, gives quality and nothing less than my best. I also don’t take for granted answers. My manager had answers so I applied the knowledge he gave me and grew it. Now, almost two years later, my manager constantly says “I can’t keep up with The Queen Dove, you doing it!” I felt overlooked, under appreciated, misguided and even belittled at times in Nicks camp. Outside of Nick’s camp, and away from them, was when I got to truly shine and make real strides. I believe overall, Nick is a decent person I just think he has the wrong people running his stuff but to each is own. Others may feel otherwise.
You’re currently riding high, after appearing on DJ Symphony’s Independent Invasion mixtape. How did you meet him? I haven’t met DJ Symphony, personally, yet. He said he wanted to collaborate sometime musically, I’m for it when the times right. A DJ I grew up around, named DJ T NYCE ,was actually the person who told me about the mixtape, so I did it. I had no expectations but it was dope to get that opportunity and my talent speaks for itself. I think what Symphony is doing is a great thing and, as an independent artist, I was happy to be part of the project.
Can you tell us more about your new single? My new single, “Dame Tu Cadaver,” is a Latin record and I usually drop R&B, but like I previously stated In another question I write all genres of music so this song is a reflection of that happening. “Dame” is my fist of many Latin records I’ve written to release and its special because my Mother wrote a few lines in it and I released it on her birthday 2/16/2021 so my Mom became an official songwriter on her birthday and I just know her Mom (my grandmother) R.I.P would’ve been so proud to hear me singing a Spanish record I wrote.
When will you drop your next project? I’m dropping an album this year, either in June or July 2021. While everyone waits, though, I drop a new single every single month, so there’s always something to anticipate with me. I also act, dance, and have other things going on, like my podcast and vlog that can keep supporters entertained between releases, so there’s that, too.
Where can fans connect with you on social media? I am all over every social media platform you can think of but here’s my LINK TREE to make life easier for everyone
https://linktr.ee/NatalieNichole
Everything from my music, Merch, socials, documentary to my google page is featured on that pretty little link. DONT be afraid to connect with me, I’m super personable.