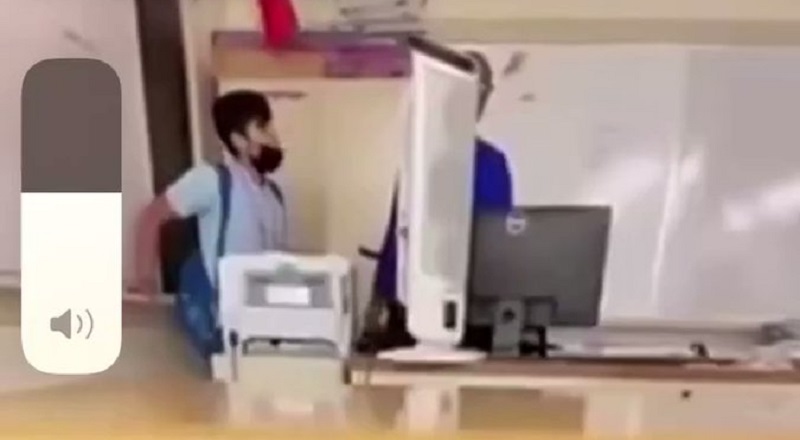 Teaching has become one of the most dangerous jobs in America. Respect seems to be a thing of the past. In this day and age, no one seems to have respect for anyone. As a result, there are students who are unafraid to disrespect their teachers. In this situation, the student boldly assaulted his teacher.

Each year, there are an increasing amount of videos surfacing within schools. Every year, the situations seem to get worse. At one point, it was the students fighting each other, which is bad enough. Unfortunately, there were videos of teachers and students physically fighting. But, in this viral Twitter video, it is one of the most horrific things shown.

Apparently, the teacher, a Black woman took the phone of the student, who happens to be Hispanic. As a result, the child went into the teacher’s desk in hopes of retrieving his phone. After that, the teacher blocks the student. In turn, they get into a bit of a shoving match. From there, the teacher strikes the child, and he strikes her back. Without reservation, the student then began to get brutal with his student, landing punches, and it sounded like he even hit her head against her desk. Whatever the case, there is no amount of money in the world worth anything like that.

More in Hip Hop News
Yung Bleu and Nicki Minaj announce “Love In The Way” single, coming on September 16
JT gets dragged on Twitter for saying she was going to “blow New Jersey up” on 9/11