Home » Hip Hop News » J. Cole’s childhood home in Fayetteville gets vandalized with nasty words about Cole and Twitter reacts in disgust to this, as Cole lets people stay in this home, rent free 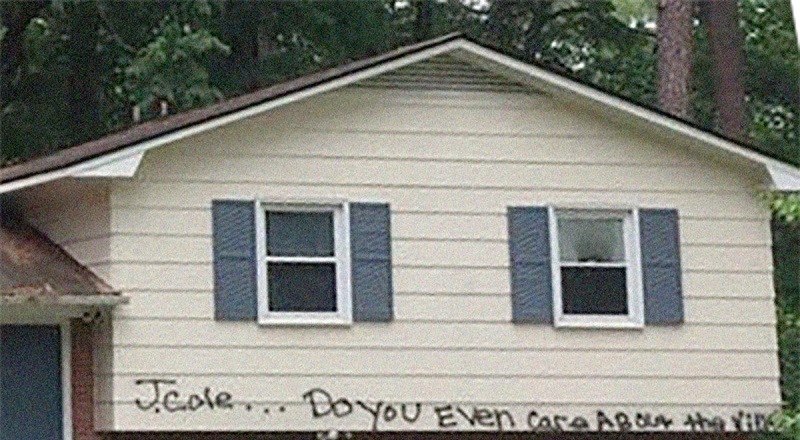 This was both sad and disturbing, on so many levels. Through his career, J. Cole has faced a lot of criticism over his Fayetteville roots. It is as simple as this, though, J. Cole represents Fayetteville, so he deserves to be embraced.

So many artists who actually are from North Carolina, South, too, never acknowledge it, and rep other cities. J. Cole was the one bold enough to put Fayetteville in his rhymes. His label is even named Dreamville and, even though no local acts are signed, Cole puts in work at home.

His actual home, 2014 Forest Hills Drive, J. Cole purchased this place, and allows people to live here, rent free. But, some impulsive rap fan decided to vandalize the home, questioning J. Cole about even caring about Fayetteville. Rightfully so, Twitter is going in on this person for their poor judgement.

Read the tweets about J. Cole below:

More in Hip Hop News
Hip-HopVibe.com is giving five lucky fans the opportunity to attend the “Ocean’s 8” premiere in NYC, TOMORROW #Oceans8
Tiarra is really messy asF and fans are wondering why she’s even on the show… Literally all she did was use Just Brittany to get Jasmine to meet Rasheeda and Twitter says she should have not brought Jasmine, minded her own business, and stayed out of it #LHHATL