Home » Hip Hop News » Jazmine Sullivan, and her mom, win Twitter, with her #BETAwards acceptance speech, where she reveals her mom had cancer 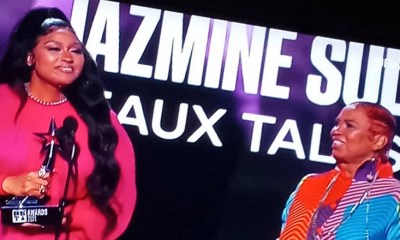 One of the most-creative artists in the game, Jazmine Sullivan created a classic, with her Heaux Tales album. This album won Album of the Year, at the BET Awards. The fans immediately fell in love with Sullivan’s mother, who revealed she suffered from cancer, a year ago

Jazmine Sullivan, towards the end of summer 2020, announced her comeback. While she is one of the most-talented artists in music, she takes lengthy breaks. However, her creative juices are always flowing.

At the BET Awards, Jazmine Sullivan gave her acceptance speech, for Album of the Year. She had her mother by her side, when she expressed gratitude for how far they’ve all come. Sullivan revealed, a year ago, her mother had cancer, which has Twitter expressing happiness they beat it.

Read the tweets about Jazmine Sullivan below: