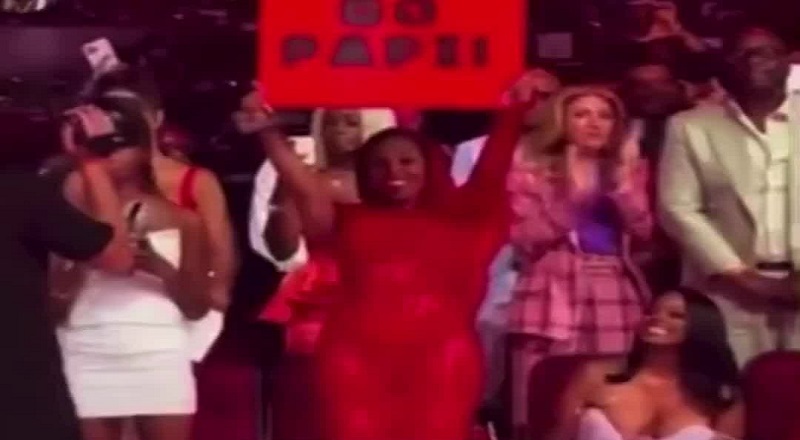 JT was beside Yung Miami, when she proudly stood up with her “Go Papi” sign, as Diddy accepted his Lifetime Achievement award. Everybody on social media caught secondhand embarrassment. As a result, Yung Miami and the sign took over Twitter.

JT had a look on her face that said it all, when Yung Miami held the “Go Papi” sign. Diddy was giving his acceptance speech, after doing a tribute for Kim Porter. With Kim Porter being the mother of four of Diddy’s six children, respect has to be given for that. When Diddy gave his speech, he shouted out Kim Porter, which is again understandable. As Diddy kept listing people, Yung Miami was not mentioned. To his credit, Diddy said he would not remember everybody. However, Yung Miami was right in front of him with a sign.

JT saw Yung Miami get roasted on social media. Jessie Woo has become a leading social media commentator. Woo took it upon herself to address Yung Miami and the sign. Jessie’s point was that Diddy mentioned Cassie and not Caresha. Despite that, Yung Miami replied to her tweet, “Girl please.” However, JT went all the way in on Jessie Woo. Unlike Yung Miami, JT went as far as threatening Jessie Woo over her comments.

More in Hip Hop News
Kanye West takes Twitter with his #BETAwards outfit, as fans say they know he is hot with that mask on
Lori Harvey says she’s in a “really good space,” after Michael B. Jordan breakup