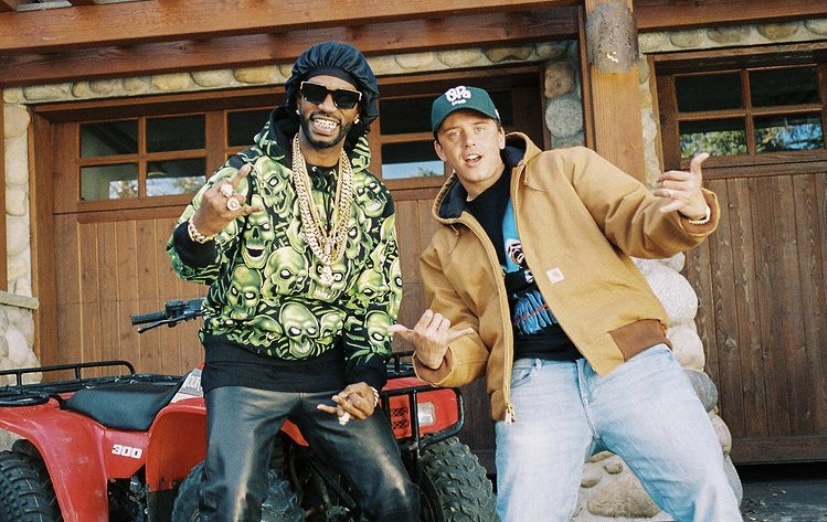 Juicy J has been one of the best rappers out since the 2000s as his longevity continues to be impressive. Last month, he also finally released his long awaited ‘The Hustle Continues’ album. This includes features from A$AP Rocky, Logic, Lil Baby, 2 Chainz, and more. It was led by the “Gah Damn High” single feat. Wiz Khalifa.

The Memphis legend is also known for being a very solid producer. He has various producer tags such as “Yeah h*e,” “Play me some pimpin’ mane,” “We trippy mane,” and “What Juicy say, he be like s*ut the f*ck up!” In a new interview with HipHopDX, he revealed that Logic actually came up with the s*ut the f*ck up line. Logic actually said this line as a joke and the rest was history.

“Logic is my best friend, man,” Juicy J explained. “We hang out all the time. We was in the studio and he was just talking. He’s like, ‘Man, what did Juicy J say? Shut the fuck up.’” We was just being funny. And I said, ‘Hey.’ I stopped it. I told the engineer, ‘You recorded that?’ He’s like, ‘Yeah,’ I said, ‘Man, I’m using that as my producer tag because that shit is hard. You talking is.’ We didn’t say, ‘Hey, Logic, go in the studio, I mean go in the booth and do this.’ He just said it and it was recording.”

Logic was very surprised that Juicy actually wanted to use that sentence. Now, it’s on a lot of Juicy’s records to this day.

“He say he didn’t think I was serious,” Juicy J added. “He said, ‘When you said you was going to use that as a tag, I didn’t think you was serious.’ He’s like, ‘Man, that shit sound hard. I’m hearing my voice every fucking where.'”

Logic also appeared on two records on The Hustle Continues. These were “1995” and “Shawty Bad.” He also released his final studio album, ‘Pressure,’ in July. It did very well as it debuted at No. 2 on the Billboard 200 chart.

Continue Reading
You may also like...
Related Topics:juicy j, logic

More in Hip Hop News
Proud Boys rip Black Lives Matter flag off prominent Washington, DC church and burn it; DC personality, Michael Starr Hopkins shares video and reveals he and his family belong to this church [VIDEO]
Ann Marie Released From Jail on $60,000 Bond After Her Gun Supposedly Fell Off Table and Shot Her Male Friend; Placed on House Arrest and Other Restrictions