Home » Articles » Kanye West is in The Process of Starting to Build 70,684-Square-Foot Amphitheater on His New Wyoming Ranch [PHOTOS] 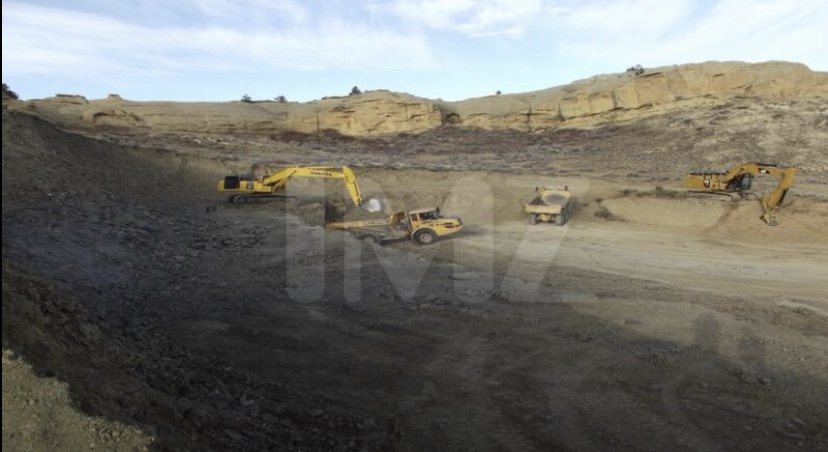 Kanye West definitely loves the state of Wyoming as he owns a ranch called Monster Lake Ranch. He bought it this past September for around $14 million. He also had the listening event for his “Ye” album last year in the state. Now, he’s starting the process of getting a 70,684-square-foot amphitheater built there as well, according to TMZ.

According to documents, West and Park County officials are in deep talks about the amphitheater as large amounts of land have been cleared for it to happen. West calls it a “West Meditation Space Large Impact Structure.” 175 parking spaces would have to be built but the state of Wyoming says they could likely cut that in half for him.

West added that he doesn’t plan to place any utilities at the amphitheater such as electricity or plumbing. As far as the structure of the amphitheater, West describes it as a circular, concrete design with the ground sloping downhill towards the center of the circle.

Park County Planning and Zoning Department also submitted documents voicing their concern though on things such as how construction on this amphitheater would impact local wildlife. West will be advised to not start construction in the winter due to disrupting the wildlife and their migration patterns.  Whenever the amphitheater does get completed, it should be huge for West. Expect festivals to be held there as it will definitely be in demand due to his name being attached to it.

Check out photos of the construction site in Wyoming for the amphitheater below, courtesy of TMZ.

Continue Reading
You may also like...
Related Topics:kanye west, wyoming

More in Articles
Omarion finally talks Apryl and Fizz dating, saying they should be happy, she his children’s mother; O says he “feels no ways,” never saw the video of them, but said “that’s what couples do,” and co-signs Fizz saying they aren’t friends [VIDEO]
Omarion and his level of unbothered! Twitter is here for how O handled Fizz and Apryl, giving him props for sounding mature, wishing them well, and is labeled a real one for his maturity, as fellas remind how me made “Touch” and “Ice Box”