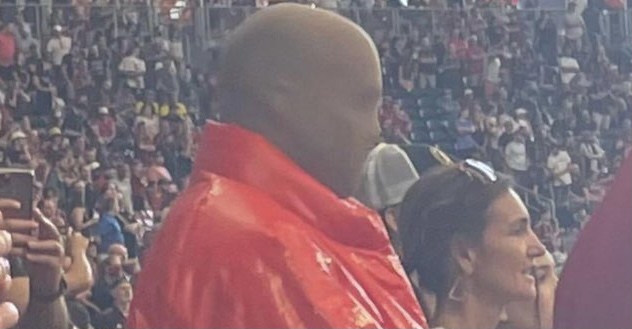 Kanye West had a listening event on Thursday night, in Atlanta, for his tenth studio album, Donda. The event was held at Mercedes-Benz Stadium, in the downtown area.

Fans loved the songs, from Donda, as collaborations included Jay Z, Pusha T, Lil Durk, and more. The project has yet to be released, as it was initially supposed to arrive, on July 23. The new date is supposedly August 6, according to Justin LaBoy.

Kanye West was in attendance at the Atlanta United soccer match today at the Mercedes-Benz Stadium. He was wearing the same outfit from the Donda album release event. According to TMZ, West is actually living in the stadium, until the album is officially completed.

Since moving into the Mercedes-Benz Stadium, Kanye West has had a recording studio built, along with a place for him to live, and a private chef. According to reports, Kanye loved the Atlanta crowd so much that he decided he wanted to complete the album there. Many believe the album is just being mixed and mastered, because all of the songs from the album were reportedly played, during the release event.

More in Hip Hop News
Boosie Calls on Anyone Who Kills Deers, To Slide in His DMs, After Saying That Deers Keep Coming To His Property [VIDEO]
Yung Miami was spotted with Diddy, at nightclub, following City Girls’ Rolling Loud performance [VIDEO]