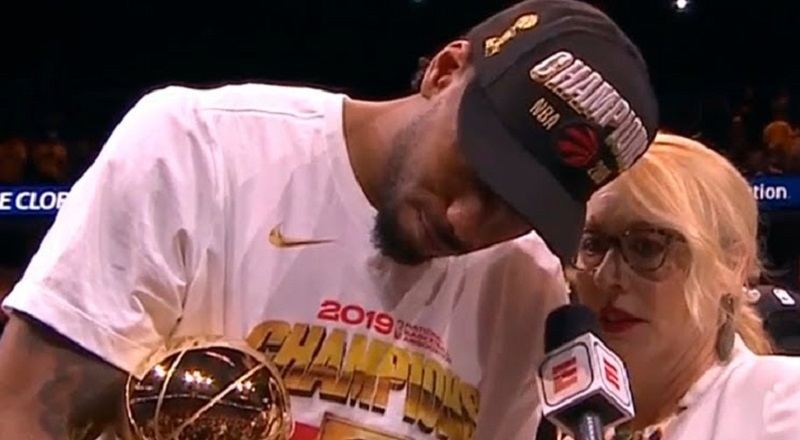 Life changed for Kawhi Leonard, at the hands of the Golden State Warriors. Their first Kevin Durant season saw them focused on avenging their 2016 Finals loss. But, Kawhi Leonard was a man on a mission, capable of stopping that.

In 2017, Leonard led the Spurs on a playoff run that took them to the Conference Finals, vs. the Warriors. At Game 1 halftime, San Antonio led by 30 points. But, Zaza Pachulia essentially killed the Spurs’ next two seasons, as Leonard was hurt, and stayed out, forcing a trade.

Kawhi Leonard was ultimately dealt to the Raptors, who gave up their franchise player, in DeMar DeRozan. In the end, most Raptors fans who were upset say it’s worth it, as Leonard got them a title. But, during his Doris Burke Finals MVP interview, Kawhi didn’t sound very confident about re-signing with Toronto.

More in Hip Hop News
Doris Burke’s voice is already being dragged by Twitter, as she presents the Toronto Raptors their NBA Championship
Kawhi Leonard SMILES and DANCES in #Raptors celebration of winning the #NBAFinals [VIDEO]